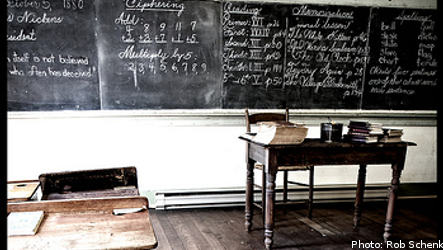 But performance has declined and Swedish pupils are falling behind.

“The development is comprehensively negative,” the agency has concluded in a new study compiling results from both international and national studies completed in recent decades.

The new survey broadly confirms the analysis made by the education minister, Jan Björklund. His interpretation of the agency’s statistics has been questioned by opposition politicians and led to him commissioning a comprehensive study.

In maths Swedish pupils are currently above or on the average in all studies.

The reason behind Sweden’s relative decline with regards to results is not only due to improvements in the performance of pupils in comparable countries, the agency explained.

“Sweden’s results in the surveys are declining,” according to the agency. The period under consideration is from 1991 to 2007.

Jan Björklund was quick to point the finger at the opposition after the agency published its findings.

“The opposition has to lift its head out of the sand. It is the Social Democrats that over 30 years have created the schools policy that has led to this problem, and they now have to re-think. I understand that they had hoped that the education agency would find fault in my judgement, but the board does not.”

Björklund expressed concern over the development and called for action.

“The situation is very worrying. The results are declining in key subjects in Swedish schools, and that is why education policy is being quite radically restructured,” he said.

Marie Granlund, the education spokesperson for the opposition Social Democracts, denied however that the agency’s findings support the minister’s description of the situation.

“No. Of course not! But that is not the same thing as saying that there are not challenges to be faced. The report clearly shows that he has made a mess of the statistics. That he throws around words that are very, very exaggerated and creates a picture that the Swedish schools system as in crisis.”

“I think that the most important thing is that we address the problem.”

The education agency’s director-general Per Thullberg concludes that the development in Swedish schools is concerning.