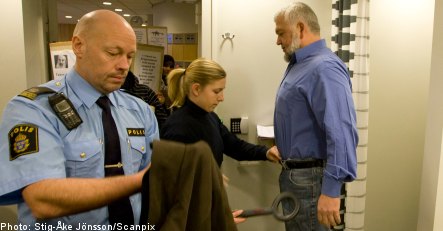 All visitors were subject to a search as they entered the Malmö District Court for the trial of Khalid al-Yousef, the 44-year-old head of the al-Aqsa Spannmål, the Swedish branch of the al-Aqsa Foundation.

The foundation has collected more than 4 million kronor ($476,000) which it contends is used to help support Palestinian orphans and other humanitarian efforts. But prosecutors allege that al-Aqsa funds were sent to Hamas.

At the start of the trial, prosecutor Agnetha Hilding Qvarnström explained that everything related to the Palestinian question is politically explosive, referencing the recent escalation between Israel and Hamas militants in Gaza.

“The case isn’t about taking a stance in the conflict, but about the fact that Hamas has been labeled a terrorist organization by the EU,” she said.

She then began reviewing the history of Hamas, its bylaws, and leadership, arguing that Hamas had established itself through violence and that the organization had “suicide bombers as a trademark”.

In her case, Hilding Qvarnström will attempt to show that al-Aqsa spannmål sent money to organizations with ties to Hamas and in so doing contributed to the deaths of innocent people in Israel.

“I assert that they have ties to Hamas and that’s what I intend to prove,” she told the Sydsvenskan newspaper.

As a part of her case, Hilding Qvarnström plans to call a witness from Interpal, a UK-based organization which directs aid to Palestinians.

The witness is expected to confirm that Interpal and al-Aqsa spannmål are both part of the Union of Good, an umbrella organization the US claims was created by Hamas leaders to facilitate financial transactions for Hamas.

Back in 2003, the United States requested that Swedish authorities freeze al-Aqsa Spannmål’s assets because it suspected the group was funneling money to Hamas.

The group’s accounts were frozen in 2006 and Al-Yousef was arrested on suspicions of preparing acts of terrorism and general destruction.

However, he was later released due to lack of evidence.

He now stands charged with crimes against Sweden’s terror financing and sanctions laws. If convicted for the first crime, al-Yousef faces a penalty of six months to six years in prison.

One of those in attendance at the trial said that she had sent thousands of kronor to al-Aqsa spannmål, and is very upset about the charges against al-Yousef.

“I’ve sent money to children who don’t have any parents, they have no place to live; they’re starving. I’ve sent it to the children, not to Hamas,” she told the TT news agency.