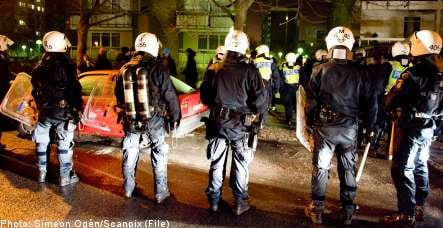 On its own, “blatte” is a derogatory Swedish term often used in reference to an immigrant.

What police who uttered the comments didn’t know was that their statements had been caught on the police’s own video recordings, the Sydsvenskan newspaper reports.

However, he said he doubted that the views expressed by the officers in question reflects the views held by the majority of Swedish police officers.

The video was played recently during the trial of a 21-year-old who stands charged for violent rioting in connection with the Rosengård demonstrations.

On the tape, listeners can hear internal chatter between police discussing the suspect.

“You little ape son of a bitch. Should I make him sterile when I catch him?” said one police officer on the tape.

“Yeah, he’s going to get beat so well that he won’t be able to stand on his own legs,” answered a colleague.

Later another officer chimes in, referencing a figure from an ad campaign for the Ica grocery store chain and adding his own racist twist.

“Yeah, I agree with that guy from Ica, ‘You’ve come to the wrong city, damn immigrant’,” he said.

Now the police are set to be reported for their offensive language, said the highest ranking police chief in Malmö, Ulf Sempert, who is distraught over his colleagues’ comments.

“I can only apologize to these young people,” Sempert told Sydsvenskan.

“I obviously don’t accept that they threw rocks, if they were involved in throwing rocks at police officers, but just because of that they don’t deserve to be treated this way by Swedish police.”

The officers’ comments even prompted a statement from Sweden’s Minister of Justice Beatrice Ask.

“I became extremely upset when I heard this on the news this morning. I know that police leadership is just as upset, and plan to report it,” she said.

“Every time a police officer makes a mistake and this isn’t a mistake, this is a huge mistake, the whole organization suffers because of it.”

The three officers featured in the video were identified during the day on Thursday and reassigned to jobs in which they are barred from interacting with the public.

“I have had a long conversation with one of the and he is deeply saddened by what he said,” Sempert said in a statement released on Thursday.