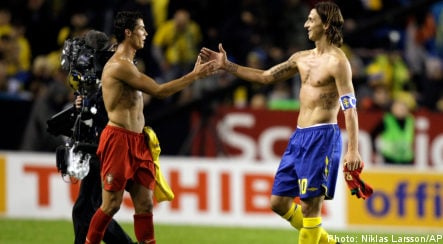 Speaking to Italian media, Ronaldo claimed the reigning English and European Champions are simply better than the Italians and are favourites to progress.

And he told Inter’s Portuguese coach Jose Mourinho that he has the trophies to prove that he is better than Inter’s star Sweden forward Zlatan Ibrahimovic.

“Inter are a good team with great players but we’re better than them and I’m sure we’ll beat them,” he told Rai Sport.

“If we beat them we’ll feel like we’re just one step away from the final.”

And Ronaldo turned his attentions to Mourinho, with whom he once had a spat during the coach’s time at Chelsea in the English Premier League.

Ronaldo had claimed that Mourinho needed to take responsibility for Chelsea’s defeats rather than complaining about referees while Mourinho responded that Ronaldo was immature and lacked respect, possibly due to a troubled childhood.

Mourinho further irked Ronaldo by claiming after the latter’s World Player of the Year award that he thinks Ibrahimovic is better.

“I respect everyone’s opinions but the trophies that count are in my home,” said Ronaldo, who then went on to criticise Mourinho’s treatment of compatriot Ricardo Quaresma, who on Monday moved on loan to Chelsea after a difficult first six months in Italy.

“Ricardo has some great qualities and it’s a shame that he wasn’t given the time to prove his true worth,” he said.

“He was great for Porto and Portugal and he can’t be judged on a few matches where he hasn’t been at his best.”

“Probably the fact that he was transferred for such a large sum of money (19 million euros) put too much pressure on him and in Italy it’s not easy to do well straight away.”