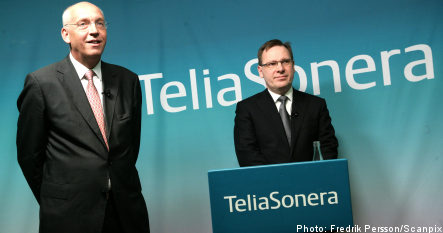 “We reported record high earnings for the fourth quarter and the full year,” TeliaSonera chief executive Lars Nyberg said in an earnings statement.

For the October to December quarter, the company saw its net profit jump 26 percent to 5.64 billion kronor ($674 million), while sales were up 13 percent year-on-year at 28.1 billion kronor.

Analysts had been expecting TeliaSonera’s net profit to rise just one percent and its sales to swell nine percent during the quarter, according to a poll conducted by Dow Jones Newswires.

For the full year 2008, the company saw both its net profit and its sales grow eight percent to 19 billion kronor and 103.6 billion kronor respectively.

Nyberg cautioned however that the company would feel the effects of the global economic crisis.

“We need to be prepared for a potentially drawn-out economic downturn that may affect consumer and corporate behavior,” he said.

This year, TeliaSonera expects its net sales, calculated in local currencies, to increase compared to 2008, but said currency fluctuations would likely increasingly influence its reported figures in Swedish kronor.

It said it planned to keep its cost base this year unchanged from the 33.8 billion it spent last year, while it aimed to maintain its 2008 earnings before interest, taxes, depreciation, and amortization (EBITDA) margin level this year.

The company’s strong position in the Nordic and Baltic countries sparked the interest of France Telecom last year, but TeliaSonera, whose main shareholders are the Swedish and Finnish states, shot down the French telecom giant’s friendly offer to buy it for about €33 billion ($43 billion).

TeliaSonera, which traditionally has focused on fixed telephony, is currently restructuring with large investments in IP and mobile telephony services, as well as a string of cost-cutting measures set to be carried out by the end of this year.

The company hopes to reduce annual costs by around five billion kronor compared to its 2007 level.

The restructuring process, which includes some 2,900 job cuts across Sweden and Finland, is meanwhile expected to cost a total of about three billion kronor, 1.6 billion of which was accounted for in 2008.