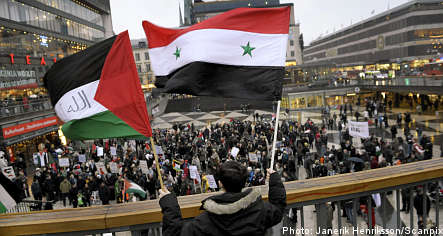 In an article published on The Local this week, Israeli journalist David Stavrou argued that much Swedish criticism of Israel’s actions in Gaza had turned anti-Semitic. Politicians and demonstrators who gathered in Stockholm’s Sergels Torg did not understand the reality of the Middle East, he claims.

Slinging accusations of anti-Semitism is easy. But why do people in any part of the world need to be professors of political science to go out and demonstrate against the killing of civilians, when they see it happening and broadcast live on their TVs?

Let’s be clear – hatred and agitation should not be tolerated, but people should also beware of how they describe events in the Middle East. The following statement from Stavrou’s article could also be seen as a subtle form of agitation: “Swedes, as lovers of peace and freedom, would be wise to encourage those who fight these forces of evil thousands of miles away or they might find them in their back yard. If they’re not there already.”

Accusations of anti-Semitism are a tool used to silence anyone who criticizes Israeli policies. But would any one criticizing the policy of Iran be labeled as anti-Muslim or anti-Persian? Are critics of the Chinese Government routinely described as anti-Chinese? Is condemning the Saudi Arabian government anti-Arab? Surely aggression, military occupation and violations of human and political rights should not be put beyond criticism?

Stavrou’s article also claimed: “there is no Israeli occupation in Gaza”. This is technically true – there were no Israeli forces inside Gaza – but it ignores the wider reality. Israel controls the air space, sea coast and land borders; the people of Gaza are prisoners, – within their prison they may have internal self-rule, but they are not free.

Since June 2006, the Palestinians have been paying an unimaginable social cost as they are collectively punished for electing Hamas as their government. This despite the fact that Western monitors agreed that the election was free and fair.

Since Hamas has been in power, Gaza has been sealed and no one is allowed to enter or to exit for any reason. The people of Gaza have been put on what Dov Weisglass, an adviser to Ehud Olmert, the Israeli Prime Minister, mockingly describes as ‘a diet’. Palestinians, he was quoted by The Observer as saying, will be kept thin, but not be made to die of hunger.

The only way people have been able to survive this far has been due to the tunnels that smuggle food and goods from Egypt. The illegal blockade was enforced to keep Gaza under siege – starving, humiliated, diseased, and exposed to selective assassination. The place was effectively turned into an open air prison. Only barely enough food and fuel was allowed to enter to hinder mass disease and death.

Richard Falk, the United Nations Special Reporter for human rights in the Occupied Palestinian Territories, said the blockade subjected “an entire human community to life-endangering conditions of utmost cruelty.” Falk called it “a holocaust-in-the-making” and appealed to world governments and international public opinion “to act urgently to prevent these current genocidal tendencies from culminating in a collective tragedy”. One can agree or disagree with this statement, but can not label it as anti-Semitism; at least he, Richard Falk himself, is Jewish.

Let us forget about Gaza for a while, and assume – since it is ruled by Hamas -, the people there “deserve” what happened to them.

Let us instead talk about the West Bank ruled – theoretically – by Mahmoud Abbas, “the man of Peace.” The crucial fact to remember here is that the whole West Bank has been under military occupation for almost forty two years, forty percent of its territory is occupied by illegal settlements which have been built since the 1970s (before Hamas even existed) and almost six hundred road blocks separate cities and villages from each other.

Moreover, inhabitants of the West Bank are subject to daily military invasions of their communities and the kidnapping of civilians. Israeli actions on the West Bank violate more than sixty UN resolutions, not to mention the Geneva Convention, which requires that the occupying power respect the human rights of the occupied people. And yet, some still claim that the conflict is between Israel and “extremists”.

Some people forward a manipulative argument about the conflict in the Middle East, in which it is described as a conflict between “moderates” and “extremists”. Many claim that it is somehow linked to the attacks of September 11th 2001.

But this view is historically wrong. The conflict started long before Hamas, Hezbollah or Fatah were created. It is a political conflict between the people of Palestine and the Zionist movement (later Israel). It is a conflict that led after the 1948 War to the expulsion of about 800,000 Palestinians (out of 1,500,000 people at that time) to Gaza, the West Bank and the neighboring Arab countries. Some 531 Palestinian villages and 11 cities were destroyed. This is all well documented in a book by the distinguished Israeli professor in Haifa University, Ilan Pappe.

The process started officially in 1897 with the first Zionist convention in Switzerland in which some European Jewish groups decided to create a Jewish state. At that point in time, this same conflict could have been started in one of a number of different regions; Palestine was only one of the candidate countries in addition to Uganda and part of Argentina. However, the second Zionist convention in 1901 was the one which decided where the conflict would be: in Palestine.

For those who characterize this conflict as a fight between Israeli moderates and Palestinian fundamentalists, remember this: more than eighty years ago, there was a country called Palestine, its people were Muslims, Christians, Jews, Druze, small communities from Armenia, Morocco and Greek clerics among others; they were all Palestinians. There were no borders, no walls and no victims. For those who still defend all this conflict, occupation and confiscation of territories for the sake of keeping that country “Jewish”, I ask: how is this not religious fundamentalism?

Attacks like those on the Jewish centre in Helsingborg and the Jewish cemetery in Malmö (and similar attacks on Muslim centres, Mosques, and cemeteries) should be condemned. But these actions should not be used to silence or discredit people who oppose and demonstrate against human rights violations, anywhere in the world, especially when these violations are committed by states that claim to be democratic.

Alaa Kullab is studying for a PhD in Stockholm. He is a Palestinian from Gaza.