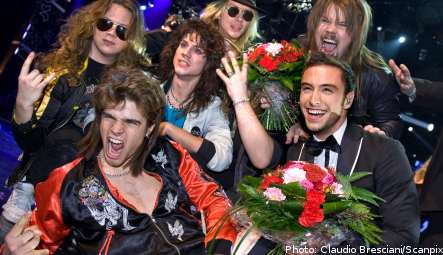 The two winners could not be more different.

Hot favourite Måns Zelmerlöv, who shot to fame when he competed in Idol 2005 and TV4’s Let’s Dance in 2006, beat comeback duo Lili & Susie in a duel to claim a place in the final with his disco number “Hope & Glory”.

Zelmerlöw had talked about nerves earlier in the week and was visibly relieved when his qualification was assured.

“I am still more happy than relieved. I think I may be the happiest person in Sweden at the moment actually.”

Zelmerlöw last competed in the Melodifestivalen in 2007 with “Cara Mia” when he came third in the final.

The 22-year-old heartthrob will be joined by testosterone-charged rockers H.E.A.T. who, with their song “1.000 miles”, proved that the 80s rock genre is alive and well in Sweden’s living rooms.

Complete with white skin-tight pants, bandanas and permed hair, the five rockers took the success in their stride as they did their best to project a nonchalant rock & roll image.

“People ask us if we are charged up. But it’s like a normal gig, like, we just go for it”.

Zelmerlöw was warm in his praise for 16-year-old Jönköping sensation Amy Diamond who is competing in her second Melodifestivalen.

Diamond will get her second chance to join the finalists in Globen when she takes her dance pop “It’s my life” to Norrköping on March 7th. Diamond claimed the new international jury’s vote which increases her chances of making it to the final on March 14th.

Veterans Lili and Susie also treated the Skellefteå audience to some 1980s nostalgia with their duet “Show me heaven”.

Zelmerlöw and H.E.A.T. thereby join Emilia and Alcazar, who qualified from last week’s heat in Gothenburg, to compete for the right to represent Sweden in the Eurovision Song Contest in Moscow in May.

Diamond and Lili & Susie will join Caroline af Ugglas and Scotts to claim one of the two second chance spots.

The third heat, of four, will take place in Leksand next Saturday and features perennial favourites BWO.