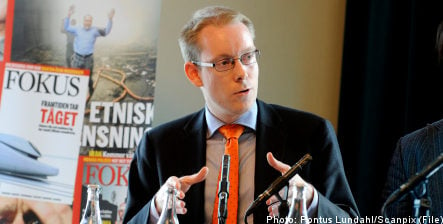 “Swedish migration and integration policy has failed,” Billström and two other high-ranking politicians from the ruling conservative Moderate Party wrote in an article in the Dagens Nyheter (DN) newspaper upon handing over a report on immigration commissioned by their party.

The group wants to increase demands on immigrants which they feel often abuse the privileges afforded them upon arriving in Sweden.

“Many immigrants remain year after year completely dependent on benefits,” they said, lamenting that especially many refugees remain outside the labour market and that criminal immigrants are allowed to remain in the country.

“We have seriously neglected the task of quickly, effectively and respectfully conveying basic Swedish rules to people who move here,” they added, calling for immigrants found guilty of serious crimes to be expelled and for people who illegally achieve citizenship to have their passports revoked.

Examples of improper grounds for citizenship include employing threats, bribes, or using a false identity, write the group in DN.

In addition to the citizenship revocation proposal, the article contains several other changes to Sweden’s immigration policies which the group plans to present to the Moderate Party’s governing board.

Among other things, they propose implementing a “starter contract” for newly arrived residents which will require immigrants to learn Swedish and “will be tied to the payment of their establishment allowance”.

It should also “to a larger extent than today” be possible to deport a foreign a foreign citizen convicted of a serious crime, even if that person has received permanent residency after many years of living in Sweden.

The group also wants Sweden to invalidate passports that are reported missing, reporting that over 200,000 Swedish passports “are floating around in the world”, many of which were likely sold rather than lost, they suspect.

They say it shouldn’t be “possible to, time after time, loss one’s passport” without something happening.

“After a number of lost passports, a police investigation will precede the issuing of a new passport,” they write.

Sweden has been hardening its generous immigration and asylum policy since the Moderate-led coalition government came to power in 2006.

The working group’s proposals will now be discussed by the three other centre-right coalition parties before possibly being voted on in parliament.

They are also set to shape the Moderate Party’s immigration policy ahead of the next general elections in 2010.