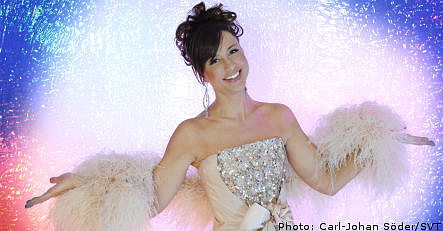 Three million Swedes – in a country of just over nine million – tuned in last week for SVT’s broadcast of the first heat of Sweden’s Melodifestivalen, the first step on the road to the 2009 Eurovision Song Contest.

Ask any discerning restaurateur in even the more sophisticated cities of Sweden and they’ll confirm that the dish-guy knocked off at eight as the early diners scuttled home to their chips and dip.

Thirty-five years have now passed since ABBA won the Eurovision crown with “Waterloo”. Aside from ABBA’s win, the contest that year is remembered for BBC presenter, Katie Boyle, attempting to preserve her modesty with her prompt cards as her tight dress left no space for her underpants.

ABBA, first time round, was not something one would admit to liking – I knew that already as a single digit youngster.

My eight-year-old yesterday named the group as one of her two favourites.

Could she be part of a New Abba Generation?

She would not be alone. With record audiences turning up for “Mamma Mia!” in a time of plunging cinema attendances, and a third of the Swedish population tuning in for the heats of Eurovision, has ABBA, the very essence of Eurovision “schlager,” come out of the closet, and even become cool?

The fab four, and by that I mean of course Agneta Fältskog, Björn Ulvaeus, Benny Andersson & Anni-Frid Lyngstad – ABBA, made their international breakthrough that 1974 night on England’s south coast.

Thirty-five years later, 27 years since the group disbanded, Björn & Benny’s film “Mamma Mia” has surpassed Titantic as the highest grossing UK film of all time, netting more than £69 million ($100mn) at the box office. The success has been repeated across the globe.

Dagens Nyheter, Sweden’s culture newspaper of record, gave the film a four (of five) and it has been nominated for three Baftas, and two Golden Globes.

Has the levelling effect of nostalgia lent the group a certain retro-credibility?

Mamma Mia, like Eurovision, is pure escapism. Tourism numbers are booming in the Greek islands as romantics go in search of a slice of that Mamma Mia magic.

I saw the film in a quaint little movie theatre in a wing of an old English stately home – the mostly middle aged, middle class women in the audience were visibly itching to get up and dance in the aisles and proclaim “Honey I’m still free, take a chance on me…”

With the world about to end, on four fronts at my last count, we have perhaps finally jettisoned over thirty years of repressed indulgence since “Waterloo” and are grasping on to something surreal, something uninhibited. Something that we know is a little sad and embarrassing but with the polar ice vanishing faster than the interest on my mortgage, are we past caring?

No time to dwell, they are just starting the ABBA medley…