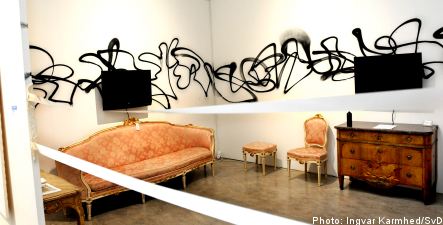 The work, entitled “Territorial Pissing”, was a final exam project of a student who graduated from Konstfack in 2008.

Part of the work featured a film in which someone vandalizes a Stockholm subway carriage.

Now the centre-right members of the education committee will hear what Ivar Björkman, head of Konstfack, has to say about the matter.

“This is what people are talking about right now. I want to hear what’s going on at Konstfack, what sort of requirements there are for advising, and what sort of ethical guidelines they have relating to final exams,” said Moderate Party Riksdag member Margareta Pålsson to the Svenska Dagbladet (SvD) newspaper.

Members from the opposition political parties who sit on the committee were against calling the art school director in for a hearing.

“If a crime has been committed, we have police who can investigate. It’s not something the education committee or the Riksdag or the culture minister should be involved in,” Rossana Dinamarca of the Left Party told SvD.

Culture minister Lena Adelsohn Liljeroth was highly critical of the work when she saw it at an art show last weekend.

The call for a parliamentary hearing with Björkman came on the same day that two copies of the vandalism video featured in “Territorial Pissing” were sold for a total of 65,000 kronor ($7,365).

The buyers include a Finnish are gallery, as well as an elderly collector from Norway, according to Sveriges Television (SVT).