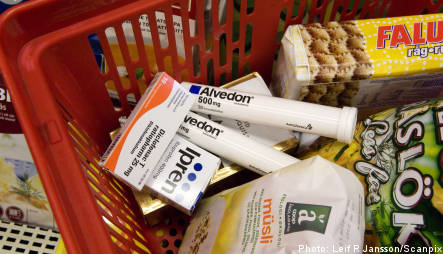 “The government aims to make it possible to sell certain non-prescription drugs in other stores as of November 1,” the Social Affairs Ministry said in a statement.

The Apoteket chain of pharmacies is currently the sole provider of prescription and non-prescription medication in Sweden, meaning that Swedes wanting to buy a headache tablet or other over-the-counter products must go to one of Apoteket’s stores.

The centre-right government that came to power in 2006 has previously announced other steps to end the 35-year-old pharmacy monopoly.

Among other things, it will allow private actors to run Apoteket stores.

The government has argued that the proposed changes would improve the availability of medicines for customers in the form of more pharmacies and longer opening hours, and create downward pressure on prices as more providers entered the market.

“At the same time it is important to underline that the pharmacy business will continue to be subjected to strict regulation,” the ministry said Friday.

Among other things, non-prescription drugs sold in other stores after November 1 will only be sold to people over the age of 18, and the drugs will be placed out of reach for consumers, requiring shoppers to ask store staff for assistance.

The government expects both domestic and international interest in the Swedish pharmacy market.

The left-wing opposition is opposed to the moves to end the monopoly, but the government holds a majority in parliament.