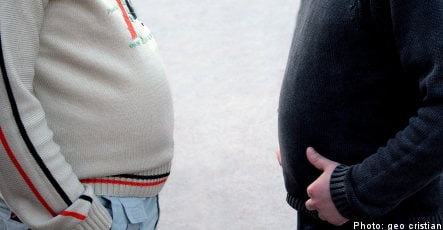 Simply being overweight, but not obese, from an early age boosts the risk of premature death by a third — as much as smoking up to 10 cigarettes a day, researchers from Karolinska Institutet in Stockholm reported on Wednesday.

People who are clinically obese by the age of 18 more than double that risk, putting themselves in the same danger zone as long-term heavy smokers of normal weight, they found.

And combining the two factors accumulates the risk: an obese heavy smoker, for example, is nearly five times as likely to die prematurely than a non-smoker who is neither too thin nor too fat.

At least a billion people in the world are overweight, and nearly a third of them are obese, according to the World Health Organisation (WHO). Obesity rates have soared over the last three decades, especially among children.

Earlier studies have shown that being excessively fat shortens lifespan and leads to increased rates of chronic disease such as diabetes and arteriosclerosis.

But researchers have disagreed sharply up to now on whether being above ideal weight without crossing the line to obesity takes years off one’s life.

Nor have previous studies directly compared the impact on mortality of smoking and excess weight.

The study designed by Martin Neovius of the Karolinska Institutet in Stockholm goes a long way to settling the debate, and shows clearly for the first time that being too heavy can be as dangerous as smoking a couple of packs a day.

Neovius and colleagues analysed data for 45,000 men who underwent mandatory military conscription tests in Sweden in 1969 and 1970 at the age of 18.

Data included participants’ smoking habits, and their body-mass index (BMI) — weight in kilogrammes divided by the square of one’s height in meters.

The lowest death rate, as expected, was among non-smokers of normal weight. But researchers were surprised to find that being obese carried a greater risk of premature death than being a heavy smoker.

Even more startling, however, were the dangers of being overweight.

“What we show is that for the overweight, there is a significantly increased risk of premature death, similar to smoking one-to-ten cigarettes a day,” said Neovius in a phone interview.

Two key studies in the United States — one at the Center for Disease Control and the famous Nurses’ Health Study at Harvard — had arrived at opposite conclusions on this question.

“Our results confirm the Harvard findings,” said Neovius, whose research was published in the British Medical Journal.

The two studies are highly complementary, he added. “We find exactly the same in men as they did in women,” erasing any doubts as to possible differences across the sexes.

The Swedish study did find, however, that being severely underweight — a BMI of under 17 — carried about the same risk of early death as being overweight or a light smoker.

Policy makers should take note of these results, and increase awareness of the risks related to being too fat, or too thin, Neovius said.

“Anti-smoking campaigns have been very successful. But we don’t have any good preventative programmes for overweight and obesity,” he said of Sweden, adding that the situation elsewhere is comparable.