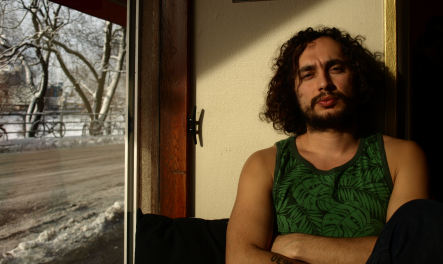 Hakan Vreskala is a Turkish musician who has been living in Sweden for eight years. Together with his band and DJ friends, he is about to embark on a tour to play music from Istanbul: a unique mixture of punk, rock and oriental music. He’s heading to Gothenburg on February 26th and Stockholm on February 28th.

For those who are unfamiliar with it, can you tell us about your musical background?

I formed my first band at the age of 10 in Izmir, Turkey. We used to play punk. I don’t remember the transition from punk music to folk music though. I came to Sweden in 2001 and began working as a street musician.

Then I entered the Royal College of Music in Stockholm and since then I have had the chance the work with various musicians from all over the world making Balkan, Arabian, Kurdish and Turkish music, with musicians including Şivan Perwer, Aida Nadeem, Ferus Mustafov, to name just a few.

I also released an album with Swedish musician Lars Damian and there are potential projects with other Swedish musicians as well. I am a part of Süperstar Orkestar that plays in a Balkan style and Efkar Ensemble.

You also have a band called Nordda. Can you briefly tell us the story of the band?

I have always had Turkey in my mind and I formed this band together with my friend Deniz Cuylan, who lived in Sweden for a while and with Selen, who is in Turkey now. We made an album called “Infinite Face”. The songs are in English with many ethnic elements. The genre is acoustic electro with Nordic tunes. We go on tours in both in Turkey and in Sweden and we are currently working on a new album.

You have been living in Sweden for eight years now. How has studying music and living here changed your perspective and career as a musician?

If I hadn’t come to Sweden, I wouldn’t be able to get to know the sub-cultures that are particular to Sweden. In Sweden, the variety of immigrants makes it an excellent spot for musicians who are seeking inspiration from them. And these musical influences make for an unusual repertoire: music played at an Assyrian christening ceremony or Kurdish henna ceremony.

When I first came here, I thought I was going to play at jazz festivals and travel around the world, but it hasn’t happened like that. I’ve turned out to be a wedding musician instead, playing at Turkish, Kurdish or Assyrian weddings in Sweden. I have learnt a lot from that though.

How did you come up with the idea of Klubb East’n’bul?

Klubb East’n’bul is the name of a project and a series of a tours around the country. We are in Gothenburg on February 26th and in Stockholm on February 28th. I’ve played at weddings and listened to punk at home, so I wanted to pick out the most entertaining parts of both and play it with a live band and guest musicians.

We want to entertain ourselves first, but I am sure everybody will love it. What is important is to make people from different cultural backgrounds dance together and the language we are singing in does not matter at all. Swedes are quite curious about how people from other nationalities have fun actually.

When it comes to having fun through the music, do you observe any differences in Sweden?

I think what makes a difference in having fun is not one’s nationality, but one’s social class and income. People that belong to the highest social class and have the highest education do not have fun as much as others. It is certainly not like in Istanbul, where 15 million people live and 70 percent of them are under 30 years old.

But we shouldn’t forget that Swedes were once Vikings, one of the wildest and most fun people in the world. In general, I don’t find it useful to compare two countries. It only makes you unhappy.

Can you say that music helps you overcome the problems you would otherwise have to live with as an immigrant in Sweden?

Of course! An immigrant musician gets more attention than an ambassador since the musician is not a political symbol but stands for the fantasies about a race or a country. I believe that to be successful as an immigrant profile in Swedish show business, you should try to highlight your ethnic background although I wish it were the other way around.

Is that what you recommend to other foreign musicians living in Sweden?