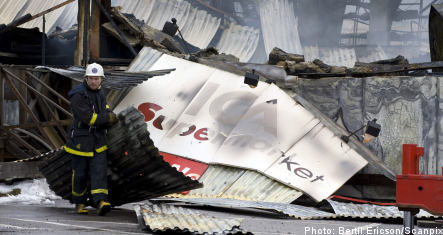 Security police (Säpo) have been called in to investigate a connection between the attacks and an anti-US extreme left wing group.

“We have classified them all as arson and are working on the theory that they were started deliberately,” said Kia Samrell at Södertälje police.

Police have not ruled out a connection to fires in the town in December which destroyed the Coop Forum and Ica Maxi supermarkets.

An extreme left wing group calling itself Global Intifada claimed responsibility for the December fires and according to reports in the Expressen newspaper, the two Willys stores destroyed on Thursday morning also received warnings from the group.

“We have not been able to confirm that the group were behind the December fires. But the investigation is not yet completed,” underlined Kia Samrell.

Global Intifada, according to a Sveriges Radio report, has been responsible for dealing out leaflets in Södertälje encouraging the public to make Molotov Cocktails and use them on shops selling American products.

This threat, as yet unverified, has been communicated to the US Embassy in Sweden which considered it of sufficient importance to issue a statement confirming that it had been in contact with Södertälje police. The US authorities advised “caution while shopping and be attentive to suspicious behaviour”.

The US Embassy was refusing to comment on Wednesday’s attacks.

“As far as we’re concerned it’s a police matter,” a spokesperson told The Local.

“Property worth millions has gone up in smoke,” he concluded.

The first call came in to police at 12:15am from the Willys store in the Weda area of the town, near the E4 motorway. Barely 20 minutes later police received information that an Ica store was also on fire in the area.

Shortly before 4am the third alarm call was received that a Tempo store in Saltskog was on fire and a fourth fire was discovered by Willys personnel at a store in Sydhamnen. The staff were able to extinguish the fire themselves.

“The fire at Willys is still raging. We are trying to protect nearby stores and offices,” according to Per Hultman at the Södertälje fire service.

An Ica store in the vicinity has completely burned down and fire services are working on securing the site. The Tempo store in Saltskog has suffered the same fate.

Between 75 and 100 fire fighters from the whole of the Stockholm and Nyköping region took part in the operation to battle the fires, primarily working to limit their scope and prevent them from spreading to adjoining buildings.