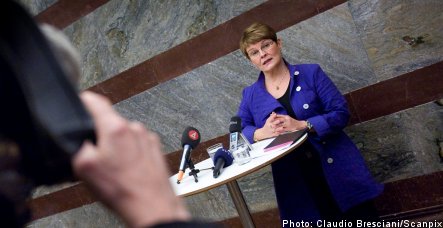 “From our side there’s no point in continuing these discussions,” said Olofsson.

Instead, the government now plans to move forward on energy policy based on an agreement reached by the centre-right governing parties several weeks ago.

Olofsson claims that the Social Democrats haven’t taken a clear stance on whether or not the party supports a plan to replace aging nuclear reactors.

“They just keep saying they want to see the whole picture,” Olofsson said.

“We don’t want to build new nuclear plants, but we don’t need to answer the question because it’s been asked way too early. When we press the government negotiators even they say that no decision about new nuclear plants needs to be made before 2015,” he told TT.

The opposition wants several issues to be fine tuned, and reiterated its demand that the leaders of all political parties participate in the discussions.

They don’t think it’s sufficient to only have a Centre Party representative at the table because each centre-right party interprets the government’s energy policy agreement differently.

“It was obvious during the negotiations that the government never had any plans for reaching a broad agreement that crossed over party lines,” said Tomas Eneroth, a negotiator for the Social Democrats, to TT.

At a Tuesday meeting, the opposition handed over questions in six areas to which they were promised answers by the government before the weekend.

The Social Democrats, Left Party, and Green Party question whether the natural gas infrastructure outlined in the government’s agreement should be developed commercially.

They fear that it may lead to Sweden being connected to a branch of a Russian gas pipeline through the Baltic Sea.

The opposition also believes Sweden will have a surplus of electricity over the next 30 years, which makes them question the need for building new nuclear power plants.

The three parties also have concerns about the effect on electricity prices of efforts to integrate the Nordic and European electricity markets.

In addition, the opposition wants an agreement that would keep Vattenfall in the state’s hands.