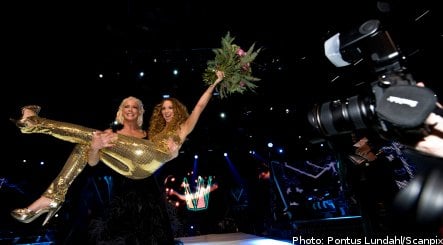 Clad from head to toe in a figure hugging gold outfit Agnes fought off early health concerns over her voice to claim the first place in the Globen final on March 14th.

“I am so shocked. I still think that they have made a mistake,” Ernman told Sveriges Television.

But the two women were generous in their praise for each other.

Sarah Dawn Finer and Star Pilots will therefore get a second chance to make the Globen final when the Melodifestivalen heads for Norrköping next week.

Swedish dance band legends Thorleifs were left surprisingly empty handed when the international jury’s vote went instead to Sarah Dawn Finer who thereby gets an additional chance to make the final.

With the heats now completed the line up for the March 7th second chance run off in Norrköping is as follows: Amy Diamond, Lili & Susie, Scotts, Caroline af Ugglas, Rigo & The Topaz Sound, BWO, Sarah Dawn Finer and Star Pilots.

Of those, two will go through the final proper in Globen on March 14th in addition to the winner of the international jury play offs.