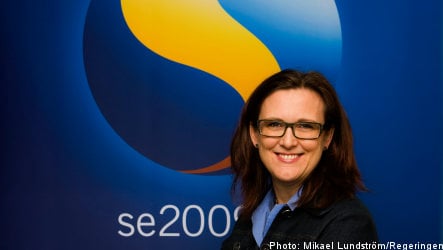 “Openness, dialogue, that Sweden belongs to the core of the EU; light, midnight sun, the Nordic light, openness. A sign that we have nothing to hide,” read the winning submission from the Stockholm-based advertising firm Bacon.

“It should show that we’re pushing an EU-agenda,” Malmström said of the new presidency website address, which is set for official launch on June 1st, 2009.

The last time Sweden held the six-month rotating EU presidency, during the first half of 2001, it used a Sweden-based domain name, www.eu2001.se.

Malmström emphasized the significance of the updated web address.

“Sweden has gone from seeing things from a strictly Swedish perspective to a more European one. We have ambitions of belonging to Europe’s core,” she said.

Developing the design, as well as the costs for printed and other material featuring the new logo is expected to cost the government 1.3 million kronor ($142,000), according to TT.

The political agenda for Sweden’s six-month tenure as the de facto head of the EU is still being negotiated, but the government’s top priority is a new climate change treaty, according to Malmström.

Other issues likely to be on the agenda include the financial crisis, the Irish referendum on a new EU treaty, a new strategy for the Baltic Sea, as well as the possibility of a new five-year programme for justice and home affairs matters.

Sweden plans to hold two summits in Brussels during its presidency as well as eleven ministerial level meetings in eight different locations around Sweden.