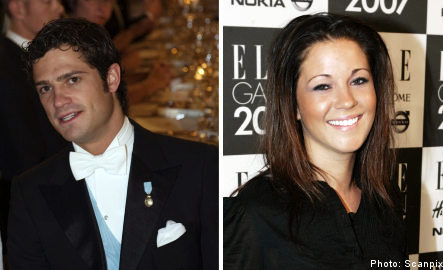 “We’ve decided to take a break. It was a mutual decision,” Pernald told the Expressen newspaper.

The recent engagement of Crown Princess Victoria to Daniel Westling has much to do with the break up, according to the newspaper’s sources.

“Suddenly, everything got serious. Earlier Emma and Carl Philip could manage to get along in the relationship. It was a bit rocky, but it worked,” one source told Expressen.

“With Daniel’s and Victoria’s engagement, Carl Philip and Emma came back into focus. Now they were expected to take the plunge.”

Pernald refused, however, to shed light on what may have caused the break up.

“I’m not going to comment as to why or on other details,” she told Expressen.

The two began dating in 1999, when Pernald accompanied the Prince and a group of mutual friends on a sailing trip to the Baltic island of Öland, off Sweden’s southeastern coast and home to the royal family’s summer retreat of Solliden.

But it wasn’t until a 2001 ski trip to the popular Åre ski resort in northwestern Sweden that Carl Philip confirmed he and Pernald were a couple, according to Expressen.

Today the 29-year-old Pernald, who hails from Askim, near Gothenburg in western Sweden, works at the highly respected Storåkers McCann advertising agency.

Sources also tell Expressen that she was a favorite of the King and Queen.

“Emma is an unbelievably down to earth and kind girl. It’s impossible to not like her. Everyone in the royal family loves Emma,” said one source.

The relationship has had its ups and downs over the years, however, and was close to falling apart two years ago when Carl Philip traveled to the United States to study design.

But the Crown Princess Victoria and Princess Madeleine stepped in to keep Pernald and their brother together, according to Expressen.

Now, however, the couple has decided it was best to take a break, and on Sunday they delivered the news to a few close friends and family.

According to Expressen’s source, Victoria and Westling took the news “very hard”.

“Everyone was really sad,” said the source, adding that the two hoped the separation might eventually allow them to get back together at some point in the future.