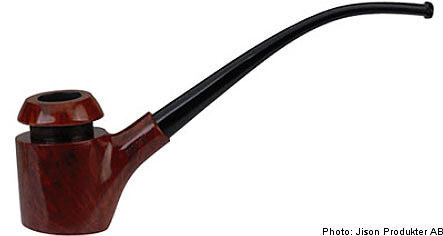 The ruling by the Chancellor of Justice (Justitiekanslern) comes after 50-year-old Ulf Olsson was acquitted of narcotics charges by the Sundsvall District Court in northern Sweden.

Police in Västernorrland county had stopped a vehicle in which Olsson was riding in January 2008.

While searching through the car, police came across a pipe with traces of what they suspected was cannabis.

The officers then detained Olsson and confiscated his pipe, destroying it in the process.

“They smashed my pipe without even checking to see if there were any traces of cannabis in it,” Olsson told The Local.

“Then they dragged me to the hospital because they assumed I was on drugs, but the tests showed there were no drugs whatsoever in my system.”

In court, police argued they were justified in taking the pipe because it was reasonable to assume it was being used for drugs.

But their argument went up in smoke when the court found a lack of evidence proving the presence of any drugs at the time police arrested Olsson, who claimed then and during his trial that he only used the pipe for smoking regular tobacco.

“It was mentioned in the case that there is legal tobacco which smells sweet, something the investigating officer admitted he was unaware of,” said the court in its acquittal of Ohlsson.

“Nor has anything in the case presented by the prosecutor’s side shown that the pipe was shaped in some special way that made it unsuitable for tobacco smoking.”

The pipe, which Olsson purchased for 400 kronor at a tobacco shop near Stockholm in December 2004, held particular sentimental value to the 50-year-old.

“It was a very special pipe,” he said, adding that having his pipe broken by the police was particularly frustrating because his particular model is no longer available.

Viewing his destroyed pipe as irreplaceable, Olsson requested that he be compensated for a full 900 kronor.

“If I get a medal from my dad that was worth 400 kronor when he bought it, but then it’s destroyed after he dies, its value ends up being much greater,” Olsson explained.

But police argued that 900 kronor was too high a price, citing research they carried out on the internet suggesting that a new pipe cost between 400 and 500 kronor.

In the end, the Chancellor of Justice agreed with the Police Board’s market research and, when factoring in the age of the original pipe, decided that 300 kronor was an appropriate level of compensation.

“This proves that I was right, and that’s what I really care about. The money isn’t that important to me,” said Ohlsson of the reduced award.

“I would rather have got my pipe back though.”