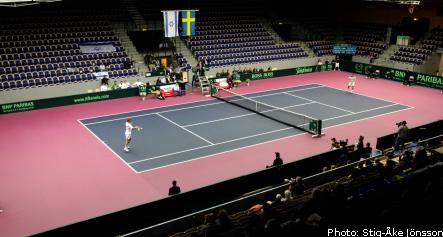 The Local reported on Friday that demonstrators had begun to gather outside the Baltiska Hallen arena in the southern Swedish city of Malmö to protest against the Davis Cup match between Sweden and Israel.

The controversy over the match has been building for weeks and the police presence in Malmö on Friday numbered some 1,000 officers.

But the expected trouble was not realized and the protests, and the first round of matches, passed off peacefully. Not a single arrest or disturbance was reported by Malmö police during the evening.

“We have had more people than usual out on the town but nothing has happened that can be connected to the tennis. It has been very calm,” according to Lars Mahler at Malmö police.

The match continues on Saturday and Malmö’s Baltiska Hallen will remain empty of supporters following a controversial decision by the City of Malmö last week.

Media reports indicate that around 200 demonstrators had gathered outside the arena on Friday. The Social Democratic youth league (SSU) is expected to organize further protests on Saturday alongside the “Stop the match” network.

“We now hope that people will be as well-behaved today,” Mahler said.