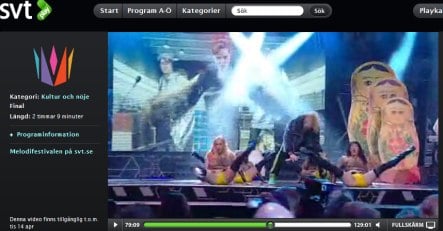 “It makes no sense to me why Sweden would show such ignorance in misinterpreting this image of Russia,” embassy spokesperson Anatoly Kargapolov told The Local.

“If Russians could see what happened on the stage of Globen on Saturday, I’m fairly certain it will reduce the number of votes they give to the Swedish singer [Malena Ernman].”

Kargapolov’s comments come in reaction to a comedy interlude from the Melodifestivalen finals featuring two Swedes who travel to Moscow on a fictitious attempt to recruit a Russian singer to perform a “musical postcard from Moscow”.

The two are then ushered into the headquarters of the Russian “Schlager Mafia” where they meet a stereotypical Russian mobster, flanked by a beautiful woman and armed guards.

As the sketch proceeds, tempers flare when the Swedes refuse to hand over a teddy bear one of them is wearing in lieu of a traditional Russian fur hat.

The other Swede then says to the supposed-gangster, “You’re fucking worst!”, at which point the mobster’s henchmen (and the woman) all draw their weapons.

The taped comedy sketch ends with an agreement between the Swedes and the head of the Russian “Schlager Mafia” at which point the programme segues into a techno version of a tongue-in-cheek song entitled “Tingeling, tingeling” (‘Ding-a-ling, ding-a-ling’) performed live on the Globen stage and broadcast live across Sweden on SVT.

The live dance number included an array of Russian stereotypes, including Cossack dancers, matryoshka stacking dolls, and a chorus of men dressed like Russian soldiers. The choreography also featured several scantily clad women wearing tight-fitting shorts with a single red star splaying their legs toward the camera in unison.

“I didn’t know how to react,” said Kargapolov.

He explained that many staff members at the embassy were bewildered by what they saw as an “offensive” and “disconnected” portrayal of Russia and Russian culture.

“I’m really upset that the Swedish people don’t bother to see beyond its own borders and sticks to such narrow-minded and outdated stereotypes of Russia,” he said.

Even the ambassador himself, Alexander M. Kadakin, has been informed of the matter, although he has chosen not to get involved personally at this point since he was out of town at the weekend and didn’t see the performance himself.

The embassy did issue an official statement however, condemning the piece:

SVT’s Ronnie Lans, an executive producer for Melodifestivalen, defended the comedy sketch and song as “satire”.

“The number was done with a lot of humour and affection,” he said.

“It wasn’t our intention at all to offend anyone. It was a comedy sketch.”

Lans explained that the satire was meant to poke fun more at Swedes’ views of Russia, rather than Russia itself.

“We’ve all been to Russia and know that’s not how it really is,” he said.

He clarified in particular that the so-called “Schlager Maffia” is actually a term applied in jest to a group of performers and artists surrounding Christer Björkman, a former Melodifestivalen winner from 1992 who now runs the Swedish contest.

“We thought it would be fun to include his Russian counterpart,” said Lans.

Lans said SVT has received nothing but positive reactions about the sketch from viewers, many of whom suggested that “Tingeling” should be Sweden’s Eurovision entry to the contest in Moscow.

“We apologize if what we did was considered insulting. That wasn’t our intent,” he said, but added that he didn’t think the number crossed over the line.

“Satire is what it is, and sometimes it can be edgy.”

He admitted that SVT could also do more to help counteract Swedes’ stereotypes about Russia, something that the embassy’s Kargapolov would welcome.

“These stereotypes sit so deeply in the Swedish psyche,” Kargapolov explained.

“Hopefully this will help ring some bells among Swedes and help them realize how disgusting some of the things are that they’ve shown.”