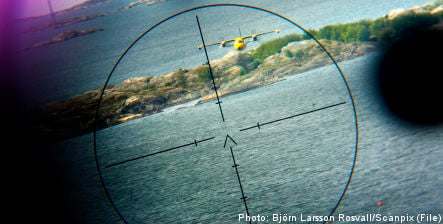 “This is the largest reform in several decades,” said Tolgfors, adding that Sweden will be well suited to defend against existing threats.

“This will be a major strengthening of Sweden’s defence capabilities.”

While Sweden today counts 30,000 troops, of whom only about a third are required to be prepared for deployment within a year, Tolgfors said the aim was to have 50,000 soldiers ready for action eithe at home or abroad within a week.

“We have so far been poorly prepared to meet sudden threats,” he said, adding that the government proposal, handed to parliament Thursday, aims to give Sweden “one of Europe’s most modern militaries in terms of organisation.”

Over the next five years, Sweden would also completely end its dependence on an already much diminished number of conscripted soldiers.

“We will move towards voluntary recruitment,” Tolgfors said, excluding the notion of a professional army.

The new deployment goal should be reached by 2019.

According to Tolgfors, Sweden is set to have a more usable military force with smaller and more flexible units which can cooperate with one another.

It will take some time to implement the reforms, especially when it comes to the shifting from a conscription-based to volunteer-based force.

Tolgfors said the current military force structure will remain in place until 2014, after which there would be a gradual shift.

The defence minister wouldn’t commit, however, to a specific date on which Sweden’s military will have be able to deploy 50,000 troops within one week’s notice.

“We’re going to need calibrate that every year,” he said.

The bill is based on two broad agreements reached by the government’s Defence Commsion which extend across the seven political parties represented there.

Considerations from a commission looking into Sweden’s conscription system are also included in the proposition.

Among other things, the bill proposes scrapping the current division between units set up specifically for duty abroad and other units. In the future, all military units will have the same capability to deploy in Sweden or overseas.

The Swedish National Home Guard (Hemvärnet) will be given a greater role in the defence of Sweden. Of the planned 22,000 strong force, 17,000 will receive access to advanced training and equipment and be required to carry out tours of duty even in peacetime.

The number of deployable mobile battalions will be increased from three to eight. The new bill also proposes to double the military’s capacity for peacekeeping operations by always having 1,700 soldiers ready for deployment overseas.

With respect to materiel, the bill calls for the Swedish Air Force to have 100 JAS Gripen Model C/D fighter planes, and an increased number of helicopters.

The proposal also calls for 122 combat vehicles, an increased number of armoured vehicles, as well as seven corvette ships, five of which will be Visby-class corvettes.

Tolgfors stressed, however, that for the government to reach an agreement on defence policy with the political opposition, the latter must be prepared to let go of unrealistic proposals to cut spending.

He argued that the opposition’s proposals are hard to justify because they are several billion kronor below the government’s proposed budget.

Sweden’s centre-right government had been scheduled to present its reform plan for military development between 2010 and 2014 last year, when massive cuts were expected, but postponed the proposal after determining that the Georgia war last August had altered its security evaluations.

“Today’s threats against Sweden cannot be solved with yesterday’s defence,” Tolgfors said in a statement.

“The war in Georgia for instance shows that developments can happen very quickly,” he added, pointing out that “that war was over in five days and the outcome was determined in two.”

Thursday’s proposal represents a political about-face after the Swedish military has in recent years repeatedly seen major cutbacks in its budget and troop numbers.