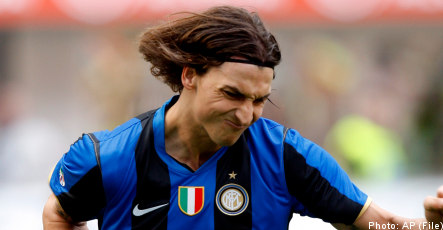 Ibrahimovic scored two goals in Inter’s 3-0 win over Reggina on Sunday, taking his personal goals tally for the season to 19, as the Milan club moved seven points clear at the top of Serie A.

After his star performance, Ibrahimovic, who signed for Inter from Juventus in 2006, hinted that he may be considering a future away from the San Siro.

“I’m totally focused on winning the title but as for next season, we’ll see,” he said.

“I’m very happy to be at Inter but next year we’ll see.”

But Moratti said Monday: “I can’t imagine Inter without Ibrahimovic.

“But if that were to happen, it would not stop the club from carrying on.”

According to the Italian press, Ibrahimovic could be targeting a club which has more success in Europe. Inter have been eliminated in the last-16 stage of the Champions League three times in the last three seasons.

“And if Ibrahimovic leaves, and we win the Champions League? In life, we change and then afterwards we regret it,” said Moratti.

“He was only upset as I was after (elimination at the hands of) Manchester United (earlier this month). He has ambition but it’s not as easy as that to pick a team that, in one fell blow, can win the Champions League.

“In any case, it’s not a question of money or a problem of understanding with the team,” Moratti added.

Inter coach Jose Mourinho added: “Like all of us, he’s very disappointed about the Champions League elimination, but he has replied on the pitch, transforming his frustration into good performances.

“I’m not worried. (Being top of) the scorers list is an extra motivation for him and who knows if it will help him win the Silver Ball, seeing as the Golden one will go to Cristiano Ronaldo or Messi if they keep doing well in the Champions League.”

Asked if convincing a player to stay had ever happened to him before, Mourinho said: “Yes, with Deco. He wanted to leave Porto after the UEFA Cup victory but he stayed and we won the Champions League the following season. So he left Porto with an even better CV.”

Immediately after Ibrahimovic’s comments on Sunday, Mourinho reacted by suggesting that the Milan club would survive without the Swede.

“Ibrahimovic is a great player but no player is bigger than a club. He has become very important to Inter but certain clubs are bigger than any player or coach,” said the former Chelsea coach.