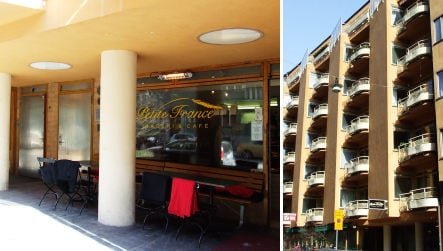 There goes the neighborhood, I thought, when Petite France won the 2008 Gold Dragon (gulddraken) restaurant award. Until then, the French bakery and cafe had been Kungsholmen’s best kept secret. Now they’d be coming from the posh parts of town to wait in line for the city’s best baguettes, croissants and the scrumptious lunches.

Enter John Ericssonsgatan 6 and you’re in Paris, Sweden. The staff is cheerful and smiling; chef Sebastien Boudet is whirling and twirling between his ovens and the café, exchanging banter with happy customers and passing out samples of his latest creation, västerbotten cheese bread. The shelves are resplendent with an extravagant variety of pastries; the breads–the largest weigh a couple of kilos–look like architectural monuments.

Built in 1935, it was the country’s first collective housing (kollektivhuset), the result of a collaboration between architect Sven Markelius and social-architect Alva Myrdal, matron saint of the Swedish welfare state.

Celebrated diplomat, Nobel Peace Prizewinner and prolific writer, Myrdal believed that people could be engineered in a direction designated by…Alva Myrdal. Human beings should be moulded and improved—sort of like lumps of cement.

She teamed up with Markelius, who belonged to the same group of radical Social Democrats in the early 1930s, to create a new social order based on the latest modernist concepts.

Functionalism, as the architecture is called, considered families, schools and other social entities as cogs in a machine. Each part contributes to the functioning of the system as a whole.

Their collective utopia rejected “elegant” architecture as bourgeois. They shunned the old pastoral ideal of home and hearth as pictured in the paintings of Carl Larsson. They condemned the traditional family and stay-at-home mother as dying artifacts.

“Hemmafru” (housewife) became a label of contempt. Without productive activity, according to Alva, “housewives grow indolent, fat, and self absorbed.” In her brave new world women should be “comrades in labour” with their husbands.

Desperate Swedish housewives would be emancipated from the burden of preparing meals. They would be thrilled to park their children in the 24-hour-a-day collective nursery while they marched off to become “productive members of society.”

Alva’s one-size-fits-all lifestyle permitted exceptions: housework was OK for some women. In the book Crisis in the Population Question she allows that “housework still offers possibilities…for frail, imbecilic, lazy, unambitious, or generally less well endowed persons to get on with life.”

The Myrdal/Markelius experiment in rational living was organized down to the last detail. Each of the “family units” contained a service elevator. Meals were prepared in a central kitchen, either to be consumed in the communal restaurant or else hoisted via the dumb waiter to the apartments of those who did not care to eat collectively. An internal telephone system permitted checking up on the neighbors.

Unfortunately, the lower classes don’t always embrace the intellectual elite’s ideas of what is good for them. They were not particularly enthusiastic about becoming a cog in Alva’s great functional machine.

The apartments, laid out according to the functionalist concept of minimum requirements, were small and of a low standard. Families wanted to raise their children in real houses, outside the city, like the Myrdal family, who lived in a villa in the leafy suburb of Bromma. The ungrateful lower classes abandoned the Markelius house; radical intellectuals moved in.

Meanwhile, Alva was busy inventing new schemes to improve the Swedish folk. On the scary side, she advocated compulsory sterilization for that segment of the population she deemed unfit to breed–around ten percent in her estimation. Her book Nation and Family is credited with having inspired the notorious 1934 law that put into place a policy of forced sterilization on eugenic grounds. The programme continued until 1975.

Fortunately, Alva is not around to see the delicious decadence into which the headquarters for her socialist experiment has fallen. These days, pink macaroons and delicate cream puffs emerge from the collective kitchen meant to serve falukorv stroganoff to the comrades. And those internal phones are used to call orders down to the bakery for fresh brioche to be hoisted by the still-functioning dumb waiter directly to the apartments of the yuppies upstairs who like to eat breakfast in their pajamas.

Not to be missed:

Lunch, especially when duck confit, or lentil soup with truffle cream are on the menu

A mighty almond croissant with cappuccino for your afternoon break.

In good weather, Saturday brunch on the sun-drenched terrace. If all the tables are taken, grab one of the excellent sandwiches or a bag of croissants, walk half a block to Norr Mälarstrand and have a picnic beside Lake Mälaren, the most scenic spot in Stockholm.