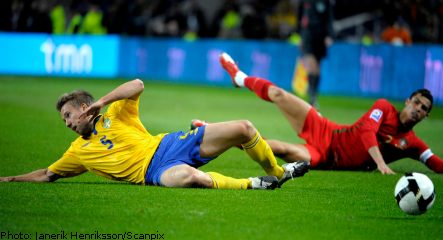 The draw was considered a success by all in the Swedish camp as the result puts Sweden’s destiny in group one back in their own hands.

With Denmark’s 0-3 win in Malta the Scandinavian countries are firmly in the driving seat in the group to secure qualification for the 2010 World Cup in South Africa.

Sweden created few chances in the match but the defensive line up held out well against a late Portuguese onslaught.

Swedish coach Lars Lagerbäck deployed Rasmus Elm and Adam Johansson to neutralize the threat of European Footballer of the Year Christiano Ronaldo. The inexperienced pair did their job well and Ronaldo rarely threatened to force a hole in the Swedish rearguard.

Sweden’s next competitive match is at home at Råsunda stadium on June 6th when they entertain Nordic neighbours Denmark in a crucial match to decide who retains the upper hand in the tight group.

Denmark currently head the group on goal difference with ten points after four (of ten) matches played. Sweden trails in fourth on six points but has a game in hand on second placed Hungary and third placed Portugal.

Sweden’s Inter star Zlatan Ibrahimovic was suspended from Saturday’s match. Lagerbäck confirmed last week that Ibrahimovic will not play when Sweden travels to Belgrade on Wednesday to meet Serbia in a friendly.