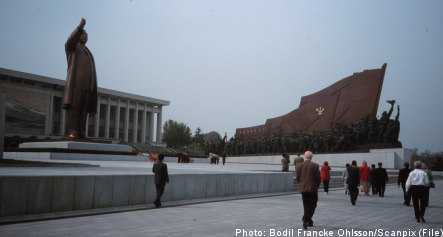 But neither ministry provided any additional details about their condition.

“It was over the weekend. A representative of the Swedish embassy met with each one individually,” State Department spokesman Gordon Duguid told reporters when asked for an update on their cases.

The State Department had been pressing for the Swedes to visit the two who have been identified as Euna Lee, a Korean-American, and Laura Ling, a Chinese-American, who work for Current TV in California.

“We can only confirm that a Swedish civil servant has been there,” said Swedish Foreign Ministry spokesperson Cecilia Julin to the Svenska Dagbladet (SvD) newspaper

According to the paper, Sweden currently has two diplomats stationed in North Korea, Mats Foyer and Johan Eidman.

US officials said it was the first time that Sweden, which represents US diplomatic interests in Pyongyang, had been able to gain consular access to the two journalists.

A US official who asked not to be named said he could not release any report on the status of their health or provide other details before the pair sign privacy act waivers.

Nor could the official say whether or not they had signed such a document.

The State Department said last week the North Koreans had assured US officials that the pair will be treated well.

JoongAng Ilbo, quoting a South Korean intelligence source, said the pair were transported to a top-security guest house on the outskirts of Pyongyang a day after they were seized before dawn on March 17 along the border with China.

But State Department officials have said they do not know where the pair are being detained. Nor could they say whether the Swedish envoy met the pair at the place where they are being held or at another location.