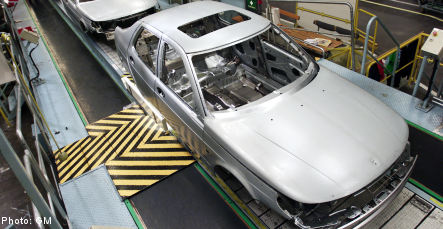 “There are currently more than 20 actively interested parties … The sale process is expected to be completed during June 2009,” the court-appointed administrator of Saab’s legal restructuring, Guy Lofalk, said in the document.

Saab launched a restructuring process on February 20th to stave off bankruptcy and become an independent unit after it was dumped by its owner US car maker General Motors.

Saab’s creditors were meeting on Monday in the Vänersborg district court on Monday to determine the feasibility of the restructuring process.

About 1,300 creditors had been summoned, but only a handful turned up, Swedish news agency TT reported.

If any of the creditors opposes the restructuring process, the court could decide to halt the procedure based on whether it deems Saab’s survival plan realistic.

Should the court find against Saab, the company would either have to declare bankruptcy or find an immediate buyer.

The turnaround plan said Saab aimed to have a positive cash flow by 2011 and was seeking to write off 75 percent of its non-prioritised debt.

Further, it said it needed one billion dollars in financing to survive. A loan of $600 million was currently being negotiated with the European Investment Bank, “following the conclusion of negotiations with the (Swedish) government about state guarantees.”

“A further 400 million dollars were expected to be injected from GM,” it said.

The reorganisation is a Swedish legal process headed by an independent administrator appointed by the court who is working with Saab management.

The process allows parts of Saab to survive and could enable suppliers, who would lose all the money owed them by the company if it filed for bankruptcy, to get some money back by agreeing to accept partial repayment.

GM, which bought 50 percent of Saab in 1990 and acquired the rest 10 years later, has washed its hands of the unit after years of losses, and has called on the Swedish government to step up and rescue it.

But Stockholm has sharply criticised GM’s decision to let Saab go, and has repeatedly stated that it will not take over the car maker.