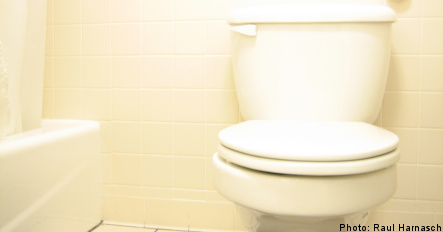 Up until now, the town council has had a rather loose set of rules governing how it recognizes employees who have spent 25 years working for Gnosjö, a municipality with around 9,700 residents.

Rather than simply offering the traditional gold watch, the council has allowed employees to purchase a gift of equivalent value from any store in Gnosjö, according to the Finnveden.nu news website.

But one employee’s decision recently to buy himself a new toilet to mark his 25th year with the municipality has Stefan Nilsson, Gnosjö’s head of human resources, rethinking the city’s policies.

“I, and many like me, think that the purpose [of the loose policy] has gotten a little out of hand,” he told Finnveden.nu.

“A memorial gift should be something you remember. Is someone supposed to sit on a new toilet and think back on their years with Gnosjö municipality?”

Nilsson suggests limiting the choice of gifts to a watch, bracelet, necklace or crystal vase.

In addition, the practice of handing out the gift during a town council meeting will also be abandoned in favour of a smaller event organized expressly for the purpose of recognizing an employee’s anniversary.