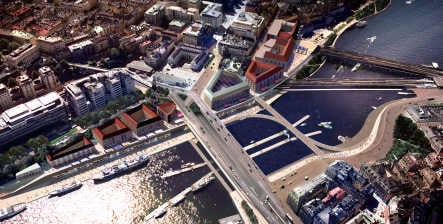 The successful design for the New Slussen Project is a cooperative effort between the London-based Foster+Partners architecture firm and Sweden’s Berg Arkitektkontor AB.

“It’s good that we finally have come to a decision about Slussen’s future,” Stockholm Mayor Sten Nordin said in a statement.

“With this proposal, Old Town can grow together with Södermalm and a new waterfront meeting place for Stockholmers will be created. We’re building a new city at the same time that we safeguard the place’s unique, historical qualities.”

Slussen (literally ‘the locks’ in Swedish) refers to an area on the northern edge of Stockholm’s Södermalm island which is closest to the city’s Old Town (Gamla Stan), which is itself on an adjacent island.

The area’s current design dates back to the 1930s and includes a complex series of bridges, boat locks, pedestrian walkways as well as an underground transit station for bus, tram, and subway traffic.

Considered a modern architectural marvel when it was inaugurated in 1935, Slussen serves as the de facto boundary between the fresh waters of Lake Mälaren and the Baltic Sea, but has long been considered in need of renovation.

In late 2007, city officials finally decided to move ahead with plans to renovate the area in order to update its design and take better advantage of Slussen’s waterfront location in the heart of Stockholm.

Berg and Foster’s winning design beat out four other entrants for the project, which is expected to commence in 2012 and continue through 2018, and cost about 6.3 billion kronor ($743 million).

The proposal was chosen in part because the scale of the planned buildings matches that of structures already found in the area.

In addition, the design features a wooden dock to be built on the Old Town side of Slussen in order to extend the pier farther out into the water, allowing more place for cafés with outdoor seating.

An airy, glass building will be built near the current subway entrance so as to not obstruct views of the areas older buildings and the design also allows for the addition of a possible tram line connecting Slussen to Norrmalmstorg in downtown Stockholm.

“It will be a functional traffic solution for the future,” said Stockholm Vice Mayor Lotta Edholm in a statement.

“The New Slussen will be the hub the city centre has been missing and will contribute to an exciting meeting between the historic and modern city.”