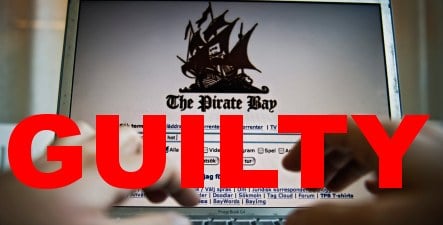 Ludvig Werner, head of the Swedish chapter of the International Federation of the Phonographic Industry (IFPI), was jubilant:

“The court has issued a clear decision, which is that people and companies engaged in the creative sector have a fundamental right to be compensated for their work and protected from the copyright infringement committed by The Pirate Bay.”

“The verdict against the founders of The Pirate Bay is not only positive for the music and film industries, but also for all the producers and businesses attempting to create legal online services based on a healthy respect for copyright.”

Christian Engström, a candidate for the European Parliament from the Pirate Party, viewed the guilty verdict as a step in the wrong direction.

“When Sweden chooses to outlaw one of our most successful ambassadors, it shows the importance of our work in the Pirate Party. Elected representatives today seem to be more interested in holding back progress than representing the people. That’s something we want to change,” he said in a statement.

“The Pirate Bay is a unique platform for distributing culture between regular people and independent artists, and that’s something we want to preserve.”

“The ruling is our ticket to the European Parliament,” concluded Engström, who expects a populist backlash against the ruling to help his party’s chances of gaining a seat in the EU’s primary legislative body.

A filesharing researcher at Sweden’s Royal Institute of Technology, Daniel Johansson, called it a landmark ruling.

“For Sweden and Europe it’s the most important case ever when it comes to filesharing,” he told AFP, recalling the Napster trial in the United States, almost a decade ago.

“The Pirate Bay as a brand is one of the most famous,” he added.

He said the verdict could contribute to tighter controls on Internet usage.

“In the end, the more there are of these kind of cases and verdicts (the more they) will influence the lawmakers, governments and people in charge on how the Internet will work in the future,” he said.

But music industry blogger and analyst Mark Mulligan said this did not mean the end of illegal file sharing, pointing out that the legal action against Napster had failed to stem the tide.

“Whatever the ruling would have been, file sharing would not have gone away,” he wrote. Mulligan also pointed out that the technology is already moving on, and people are increasingly sharing files through Instant Messenger, email, blogs, newsgroups and iPod ripping.

Some commentators asked what implications the verdict could have for Google and its YouTube subsidiary. After all, The Pirate Bay did not host copyrighted content, it merely linked to it – a bit like Google. But according to a lawyer quoted by UK tech site Tech Radar it was unlikely that Google would be targeted, as only a small proportion of the content linked to by Google was infringing copyright.