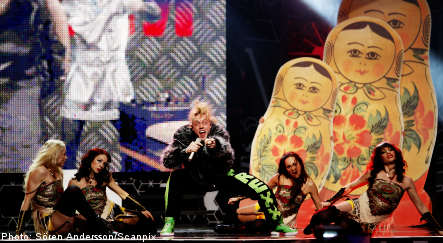 More than a month after the song first sparked controversy when performed in a comedy interlude during the Swedish Eurovision Song Contest qualifiers, Tingaliin (also known as Tingeling), by P-Bros feat. DJ Trexx & Olga Pratilova, remains the top selling single in the country.

The song leapt to national prominence in mid-March following an article in The Local in which the Russian Embassy classified the artists behind the song as “lunatics whose Russophobia should place them in an asylum rather than on Globen’s stage”.

The comments provided the springboard for a week of frenzied media activity in which the ‘Tingeling Crisis’ put the actual winner of the Melodifestivalen competition, Malena Ernman, firmly in the shade.

Ernman’s La Voix is currently at number three in the charts, which are published every Friday by the Swedish Recording Industry Association. The charts are based on sales of CD singles, internet downloads and mobile phone downloads.

See also: The Local’s blog – Sweden on the brink of Eurovision war