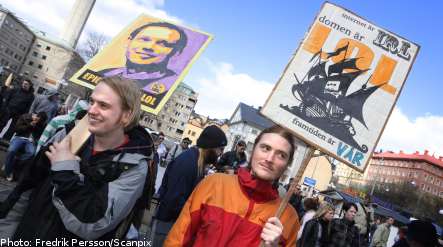 The Pirate Party organized demonstrations against the convictions at several cities across Sweden on Saturday. More than 1,000 people turned out in Stockholm to show support for The Pirate Bay defendents and the practice of file sharing.

“We young people have a whole platform on the internet, where we have all our social contacts – it is there that we live. The state is trying to control the internet and, by extension, our private lives,” said Malin Littorin-Ferm of the party’s Ung Pirat youth league to the assembled crowd in Stockholm on Saturday.

Since the Stockholm district court passed judgment on April 17th the Pirate Party confirmed on Saturday afternoon that its membership has swelled to 21,000.

The party’s youth league is now, with its 10,000 members, larger than all of the parliamentary party youth organizations.

To claim seats in the European parliament, to which elections will be held on June 7th in Sweden, the party must gain at least four percent of the vote and the support of Sweden’s younger voters will be crucial to achieving this.

In the last European parliamentary elections the Swedish voter turnout was a mere 27 percent.

The debate around file sharing and the future of the internet has piqued the interest of many young people and could increase the voter turnout among the unusually large number of first time voters, concluded Henrik Oscarsson, a political scientist at Gothenburg University.

“If they can mobilize their passive support to the voting booth on June 7th then voter turnout could increase among this group. It is a long way to the four percent threshold,” he pointed out.

The Pirate Party’s leader Rickard Falkvinge is confident of the attraction of the party’s platform.

“These citizens have never previously had a significant issue with which to become involved. It is not that politics does not interest young people – it is that the former generation’s problems and political solutions do not interest the youth,” he said.