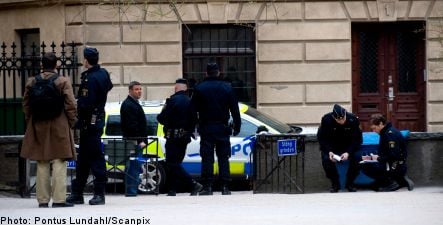 The drama unfolded outside the Storkyrka School in Stockholm’s Old Town around 5.30pm.

The victims, a man and a woman both in their thirties, were hit by several bullets. The man was shot in the chest and head, while the woman was hit in the throat and face.

Both were still conscious when they were taken to Karolinska University Hospital for treatment. As of early Wednesday morning, the man remained in critical condition.

“What we know is that the assailant came around 4pm and stood and waited for this couple,” said Stockholm police spokesperson Stefan Rådman to the TT news agency at the scene of the shooting.

The shooter then fled the scene on a yellow scooter wearing a helmet with a visor pulled down over his face.

Despite her injuries, the female victim was able to make a call to police, giving them the name of the man believed to be the shooter.

“The couple who were shot clearly knew him,” said police spokesperson Thomas Johansson.

Police won’t say whether the primary motive for the shooting was jealousy, but say they are fairly certain the two victims had a relationship with one another.