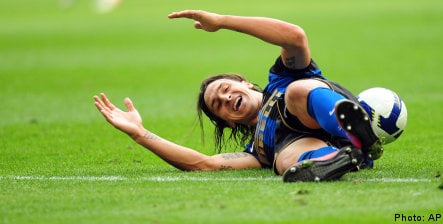 “I won everything in Italy, I learnt a lot from Italy. But there is a moment in your life, like when I was at Ajax, when you say to yourself you want to try something new,” explained Ibrahimovic in an interview to be broadcast on Monday on Eurosport.

“I think Spanish football is more the way I play. I like technical football and they play technical there,” the 27-year-old said. “I have a contract with Inter and I feel good. But as the same time I would like to test something new now because I’ve been in Italy for five years.”

Ibrahimovic, set to lift a third straight Italian title this season with Inter, also said that when he was at Malmö he might easily have joined Arsenal in 2001 rather than Ajax. He had talks in London with Arsene Wenger but finally opted for Ajax.

“When I was in Malmö there was someone who invited me to Arsenal to see Mr Wenger,” Ibrahimovic said.

“And I went there, I saw Patrick Vieira and the other big players who were there and when I met Wenger we spoke a little bit. Then Monaco, Ajax and Roma contacted me. But in the end Ajax were keener. I think it was a better solution for me even if Wenger is doing a fantastic job with the young guys.”

Then came a spell with Juventus, where the forward came under the tutelage of current England boss Fabio Capello and the Swede rates the disciplinarian coach highly.

“Capello helped me a lot, he trained a lot with me to learn about Italian football,” he said. Ibrahimovic said Capello once called him in to watch a tape with the instruction “this is how you have to move in the box”.

“On that tape was Marco Van Basten, all his goals. I was alone sitting there and watching the tapes of Van Basten with only goals, goals, goals.”

Ibrahimovic retained the lesson and has netted more than 150 league goals to date as well as 20 for his country.