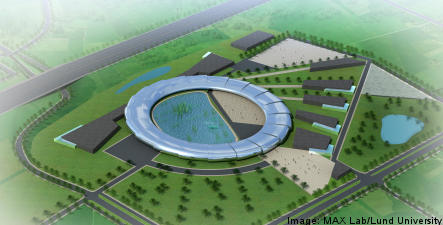 The university is now also hopeful of landing the larger European ESS project.

The university reported that negotiations for the new proposed accelerator have been concluded and that a contract is set to be signed with Region Skåne, The Swedish Research Council (Vetenskapsrådet) and Vinnova to secure the future of the Max IV project.

The Max IV facility is planned to be the next generation Swedish synchrotron radiation facility.

It will replace the existing laboratory consisting of the MAX I, II and III storage rings and the new accelerator’s design also includes an option for a free electron laser as a second development stage of the facility.

The Max laboratory in Lund is the only facility in Sweden which produces so-called synchrotron radiation for research purposes and is a highly international forum with nearly half of the attending scientists from foreign countries.

The synchrotron light produced by the accelerator is used by researchers within, for example, medicine, cell and matter studies.

The Max IV will be the strongest synchrotron radiation source in the world and will cost 2.5 billion kronor ($304 million) to build.

Sweden is competing with Hungary and Spain to house the ESS project and a decision is expected at the end of May, Swedish daily Dagens Nyheter (DN) reported on Sunday.

The university wrote in a press release on Monday that the agreement over Max IV increases the chances that the ESS project will also be located in Lund.

Researchers are reported to be split on the relative merits of the Max IV and the ESS project. Some fear that the two projects will compete with each other.

“Researchers are queuing up for the Max IV. There is no comparison with the ESS,” Bo Sundqvist at the Swedish Academy of Sciences told DN.

While others, such as Karl-Fredrik Berggren at Linköping University, who has been one of the strongest advocates for the ESS in recent years, argue that:

“It (the ESS) is a step into a new world,” adding that the project is an important tool for research within both biology and matter as well as for examining items from archaeological artefacts to engines and fuel cells.

Many researchers support both projects and argue that they complement each other but others are concerned over financing and the Swedish government’s priorities.

“Of course it is tougher to secure financing within the system, as one then has to compete with other urgent projects,” Anders Flodström, Lund University chancellor said.

The ESS will cost some 13 billion kronor to build and the Swedish government has promised to cover 30 percent of the costs. In the research bill presented in the autumn the government earmarked 150 million kronor per annum over the next five years for the project.