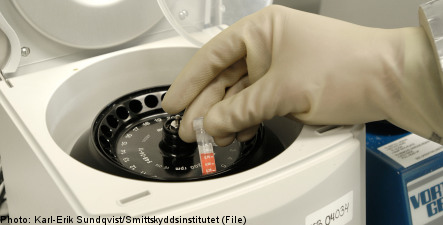 Some of those being tested have recently traveled to Mexico, the agency’s Mia Brytting told the TT news agency.

While conclusive test results won’t be known for several days, it’s possible that preliminary findings will be available late Monday which could indicate whether or not the swine flu virus has made its way to Sweden.

According to Brytting, concern in Sweden about the disease is growing.

“Many people are calling and there a lot of questions,” she said.

She emphasized, however, that the swine flu virus is less dangerous than the much-feared bird flu virus H5N1.

Sweden has stores of flu vaccine sufficient to treat 20 percent of the population, Anita Lundin, an investigator with the infectious disease department of the National Board of Health and Welfare (Socialstyrelsen), told TT.

The stockpile, which was set up in 2007, consists primarily of Tamiflu and Relenza.

“In addition there is medicine to treat an additional five percent of the population,” said Lundin.

“It’s to be used as a prophylactic in order to keep critical societal functions operating during a flu pandemic.”

“It’s going to work, that I am convinced of,” she said.

In addition to five people being tested in Sweden, an additional five people in Denmark are also undergoing examinations for possible swine flu following visits to Mexico and the southern United States.

Three women and a man who came back from a trip to Mexico and the United States last week were under observation in a hospital at Hvidovre, west of Copenhagen, the senior doctor at the hospital told TV2 news.

A fifth person was hospitalized in the northern city of Aalborg with flu symptoms after a visit to the southern United States, near the Mexican border.

But Danish authorities ruled out swine flu in the case of two people hospitalized over the weekend.

An international alert about the disease has been sounded after Mexican authorities said the probable death toll from the outbreak there had risen to 103.