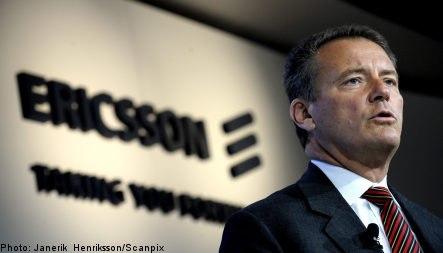 In the period from January to March, the company posted a net profit of 1.8 billion kronor ($227 million), down from 2.6 billion kronor in the first quarter of 2008.

“The effects of the global economic recession on the global mobile network market are so far limited,” Ericsson’s chief executive Carl-Henric Svanberg said in a statement.

“It remains difficult to more precisely predict how operators will act in the current climate,” he added.

Despite the fall in profits Ericsson’s results were slightly better than analyst expectations of a net profit of around 2.1 billion kronor and a turnover of 50.2 billion.

“These are exceptional times. But if we look at Ericsson’s core operations, then profit has actually increased by 40 percent,” Svanberg pointed out.

Savings programs introduced by the firm are on track and Svanberg confirmed that no further cuts are currently planned.

“Unless the the nature of the crisis dramatically changes then there should not be any dramatic changes in the market,” he forecast.

Ericsson reported a gross operating margin of 36.3 percent in comparison with 38.6 percent for the corresponding period of last year. Operative cashflow was a negative 2.9 billion kronor in comparison to a positive 4.7 billion last year.