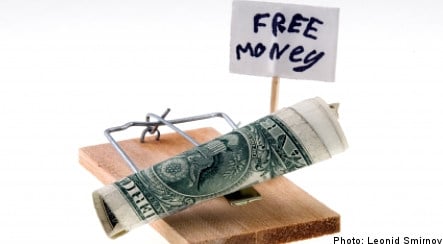 The woman, from Sundsvall in northern Sweden, was told by a gang of international fraudsters that she had won $2.5 million in a lottery, local newspaper Dagbladet reports.

But first the woman was told she would have to open a bank account in the Netherlands to secure the money. For this there would be a fee and the unsuspecting woman duly paid up.

The requests continued and the woman was tricked into handing over a total of 460,000 kronor ($57,000), most of it bank loans, over a nine month period.

“I want to warn everyone of this type of fraud,” Kjell Blomqvist at Sundsvall police told Dagbladet.

The woman received an email last summer that her email address had been entered into a lottery, and that she had won the jackpot.

After having set up the bank account the woman waited for her money to arrive.

But no funds were forthcoming and the 52-year-old then received a request for money to release a code from a consultant in the UK. The requests then continued for the next eight to nine months.

The woman was ultimately forced to borrow money from the bank in her vain bid to secure her lottery winnings.

Sundsvall police believe that the woman has a marginal chance of recovering any of her money.