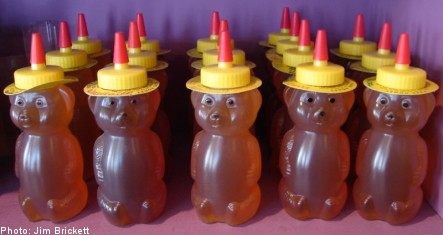 The association has requested the introduction of a protective hunt to cull the bears and to encourage the sweet-toothed mammals to stick to their customary diet of vegetable matter, roots, fungi and fish.

The association writes that beekeeping and honey production have boomed in recent years and have also become a key tourist attraction in areas of rural Sweden.

According to the National Environmental Protection Agency (Naturvårdsverket) beekeepers can only seek compensation for damages caused by wild animals if their operations are run as an industrial operation.

Many of the operations are run as small time hobbies and the association argues that all bee-related production should be protected.

It is underlined that the cottage industry is under threat in the areas of Sweden inhabited by brown bears – from the north down to as far south as Närke and northern Östergötland.

“All of Sweden shall live,” the association urges, pointing out that as only six percent of bee farming is currently located in northern areas there is scope for expansion, if only the bears and the bees could be encouraged to live side by side.

The beekeepers association points out that only three percent of Sweden’s population of brown bears can be classified as “problem bears” and urges action to ensure that the bad habits do not spread and are not passed down the generations.