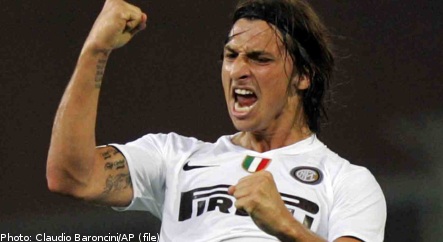 Inter, and goal king Ibrahimovic, will meet Siena at the San Siro on Sunday evening in the knowledge that Lo Scudetto is theirs once more.

The confirmation of the success will surprise few however as Inter have dominated the Italian top flight for the entire season. But Milan had put up some resistance of late and their 2-1 loss away to Udinese will be seen as something of a shock.

Aside from the three wins with Inter, Ibrahimovic has also claimed titles with Juventus in 2005 and 2006, and Ajax in 2004 and 2002. Juventus was however then stripped of the titles won in 2005 and 2006 (when Inter were instead declared champions) following the conviction of the club’s sporting director Luciano Moggi for fixing results.

If recent rumours carry substance then the 2008/2009 title success may be “Ibra’s” last with Inter however. The Local reported on April 25th that Ibrahimovic had expressed a desire to seek pastures new after his years of unparalleled success in Italy.

“I won everything in Italy, I learnt a lot from Italy. But there is a moment in your life, like when I was at Ajax, when you say to yourself you want to try something new,” explained Ibrahimovic in an interview with Eurosport broadcast in April.

Ibrahimovic’s comment were not received warmly by many of the Inter fans who demanded a meeting with their star striker to clear the air.

The Swedish star has in the spring been linked with a slew of Europe’s top clubs as he seeks to add European Champions League success to his collection of Dutch and Italian domestic titles.