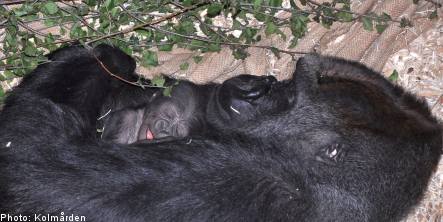 The birth marks the second time a gorilla has been born in captivity in Sweden.

“I’m just beside myself with happiness,” said Kolmården spokesperson Silvy Bohlin to the TT news agency.

Staff members at the animal park, which is located outside of Norrköping in central Sweden, weren’t even 100 percent certain that Naomi the gorilla was actually pregnant.

“You can perform pregnancy test and use the same type that women use, but they can be wrong. And performing an ultrasound isn’t so easy. It’s hard to shave a gorilla’s stomach and there’s no certainly that they’d allow it,” said Bohlin.

As a result, there was a wave of celebration at Kolmården when the new gorilla was born at 3.30am Wednesday morning.

“It’s so cute,” Bohlin said with a laugh.

She described the new gorilla as very alert. It looks strong and has no trouble hanging on to its mother.

It appears to be somewhat larger than Enzo was when he was born, with park officials estimating that the newborn gorilla weighs around two kilogrammes.

It remains unclear, however, whether the newest member of Kolmården’s gorilla family is a boy or a girl. Staff members are keeping their distance for now, allowing the mother to spend time undisturbed with the newborn.

Meanwhile, big-brother Enzo is slowly growing accustomed to the changes brought on by his new sibling.

“He’s 3-years-old and jealous. Now his father will keep him entertained since Enzo has a strong need to play. He’s like any other preschooler – things are happening all the time,” said Bohlin.