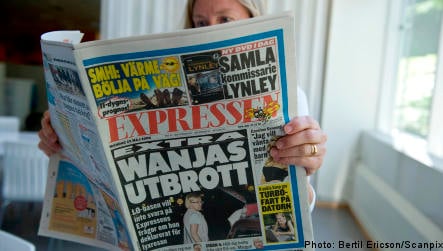 “The person in the picture is not the LO chairperson, nor is she the person cited in the article… As editor I would like to unreservedly apologize to the persons involved, and the readers, for this unforgivable carelessness,” Expressen’s editor Thomas Mattsson wrote in the newspaper’s online edition later on Monday.

Under the headline “Wanja snaps” (Här brister det för Wanja) the newspaper claimed that the embattled LO boss had refused to answer questions over revelations that her husband had stayed with her for free at the union-owned Riva del Sole resort in Italy.

But the woman that the Expressen reporter and photographer had agreed was the union boss was in fact someone unrelated to either Lundby-Wedin or LO.

The erroneous article was quickly removed from Expressen’s online edition and editorial staff spent the morning working on an updated print edition for distribution in the afternoon.

Thomas Mattsson underlined however that Expressen’s coverage of the story will continue despite the mix-up.

“Expressen’s coverage of LO and the LO chairperson has been important and relevant. It has been cited by several other media,” Mattsson stated.

The Local reported on Sunday that Lundby-Wedin had been criticized for not declaring her husband’s stay in her double room at the luxury resort as a taxable benefit.

Lundby-Wedin initially explained that she was unaware that it constituted a taxable benefit but later explained in a statement that it is her understanding that the issue is subject to Italian tax regulations and is thus not subject to tax.