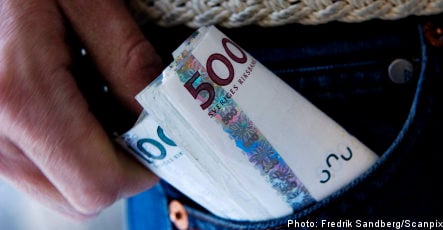 “The best way to secure jobs in a recession, and therefore the possibilities for a sustainable development of pay levels is to suspend pay rises and pay distribution in the central collective agreements,” write the CEOs for the Confederation of Swedish Enterprise, the Association of Swedish Engineering Industries, Almega, Svensk Handel and the Swedish Construction Federation in a debate article in Dagens Nyheter on Tuesday.

“Europe’s second largest youth unemployment levels are a stain on Sweden. The increase in the lowest levels of pay secured in 2007 have been a real Pyrrhic victory for the unions,” they write.

They argue that the changes are required to adapt labour to demand and enable companies to compensate employees with time off during recessions.

“In several other countries companies can make use of partially state-financed systems to adapt labour to demand. We can not do so in Sweden, which places high demands on other alternatives to quickly adapt to local agreements which can nurse the company through a temporary downturn,” the seven CEOs write.

The CEO’s conclude with an appeal to union heads “not to inflate expectations which can not be fulfilled in the 2010 collective agreement negotiations.”