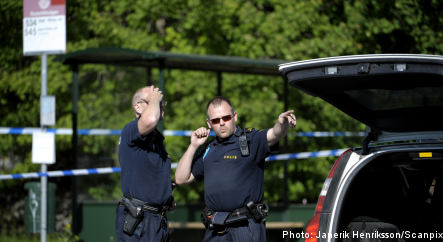 The boy was interrogated and detained on Monday evening following a massive manhunt after the 16-year-old girl was found stabbed in the back at a bus stop in the town, 26 kilometres north of Stockholm.

Police were unwilling to divulge details of their interview with the boy nor speculate as to any motive for the attack.

“I do not know exactly how much contact they have previously had with each other,” Fredrik Ladenstedt at Stockholm police told news agency TT.

The girl was found shortly after 3pm on Monday afternoon after having been stabbed at a bus stop.

The 16-year-old was conscious as she was taken to Karolinska University Hospital to receive treatment for serious injuries. Her condition during the night was described as serious but stable.

Police immediately launched a major manhunt with several police units, including a helicopter, and were able to make the arrest on Monday evening.

The attack is being classified at attempted murder.