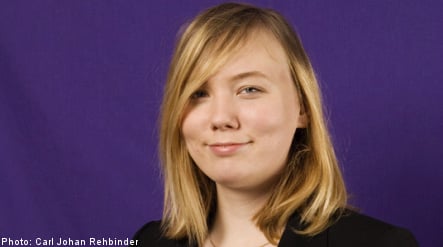 “It makes me feel great that I’m the youngest person running,” Söderberg says. “I think it’s important that young people are active in debate and care about politics.”

She says she spends her days at high school, evenings doing homework, and weekends socializing with family and friends – just like any other “normal” high school kid. Though lately she’s been particularly busy on account of campaigning with the Pirate Party.

“I hope I can be a different voice that people can listen to and understand,” she says. “I hope to get a more open EU Parliament, to speak about integrity, surveillance and piracy. Knowledge is a right as a human. I want knowledge and culture to be free.”

The primary pursuit of the party is to restructure copyright laws, eliminate patent laws and support the right to be anonymous.

“I think it’s important that everyone gets their integrity,” she says. “Everyone should have equal rights no matter where you’re born.”

Söderberg says if elected, her biggest challenge will be facing the competition: up to 785 other politicians, who are predominately middle-aged men.

“I think I’m a strong girl, and I am something different and new,” she says. “I’m not a 50-year-old male like the average European politician. I think young people need a voice in the EU parliament that they don’t have now, and it’s important everyone is represented in the democracy.”

Currently, Söderberg is finishing her first year at gymnasium, and says she hopes that after graduation she’ll be living in Brussels as a MEP. If not, she says she’s contemplating attending university in Lund or Uppsala to study social sciences and culture.

“Ever since I was a child I’ve wanted to sit in parliament – even though I’m sort of still a child,” she says with a laugh. But she adds that her experiences working at summer jobs, her research of EU studies, and activate participation in debates make her as valid a candidate as any other. Even though the attention she’s received has made her a celebrity at school, she’s trying to keep a low profile.

“Yesterday some kids at the library got in trouble for being loud, but the librarian said, ‘Not you Ellen, you’re a grown up,’” Söderberg recalls. “I felt so ashamed and weird! People think I’m more mature, some think I’m crazy, some think I’m the coolest girl in school.”

Meanwhile, she says she has reached her current point with the support of her family.

“Yesterday, my mom was laughing because the BBC wanted to interview me and she couldn’t believe it,” Söderberg says. “But my 15-year-old brother, he never thinks I’m cool. Though he has been promoting me online. Even though he won’t say it to my face, I think secretly he thinks I am.”