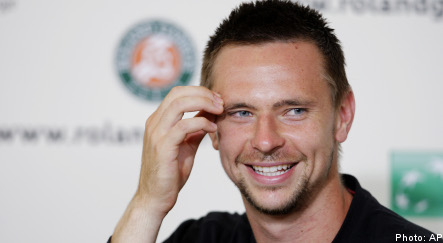 World number one Nadal was bidding to beat Borg’s record of four straight tournament successes, having equalled it in 2008, and Söderling said the great man was appreciative of the young Swede’s efforts.

“I got an SMS from him,” Söderling said after his 6-1, 6-3, 6-1 win against Davydenko. “He said congratulations and thank you for not letting Nadal break my record!

“It was weird to hear from Bjorn. He’s maybe the best player of all time.”

Söderling’s run to the last four has been one of the stories of the Roland Garros fortnight and the 23rd seed revealed he was still getting used to being the centre of attention.

“I’ve received a lot of SMS and phone-calls,” he said. “I get texts from people I don’t even know. I don’t even recognise some of the numbers.”

Sweden took home nine men’s singles title at Roland Garros during the 1970s and 1980s thanks to the efforts of Borg and Mats Wilander, but Söderling will be the first Swedish semi-finalist in Paris since his coach Magnus Norman in 2000.

Söderling admits that his nation is not the tennis heavyweight it once was, but hopes his example can lead the way for future generations.

“Hopefully this will grow interest in tennis in Sweden again,” he said.

“We had such a great tradition. For a country with only nine million people, we had so many great players.

“One year we had 19 or 20 guys in the main draw here in France. I think it goes up and down in every country. I know we have lots of good juniors coming up, so maybe in four or five years’ time I won’t be the only one.”