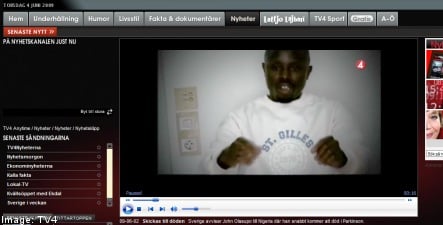 “This has become a case of pure torture for this man, plain and simple, and now we need to take care of him in Sweden,” said Christian Democrat politician Alf Svensson to TV4.

Within two years of his arrival, he started exhibiting signs of Parkinson’s, a degenerative neurological disease which impairs motor skills and generally occurs much later in life.

“He’s too weak to open a medicine bottle, he’s too weak to take in water, he can’t drink if he doesn’t have help,” Tina Hennel, Olasupo’s legal representative, told TV4.

He is also taking drugs to help slow down the advancement of the disease – drugs which would be unavailable to Olasupo in Nigeria, according to Sveriges Radio.

“He can no longer move by himself or change his clothes and when he no longer has access to his medicine, he probably won’t be able to talk, eat, or swallow,” said Bo Fråst, a doctor who has treated Olasupo at an asylum seeker reception centre in Sundsvall in northern Sweden.

Concerned that Olasupo wouldn’t survive deportation to Nigeria, Fråst wrote a letter to the Swedish Migration Board (Migrationsverket), urging it to allow Olasupo to remain in Sweden.

“According to Swedish law, it would probably be seen as a serious violent crime to leave someone to their fate when that person can’t take care of himself, but is instead left to die,” wrote Fråst.

The Migration Board was unmoved by the doctor’s plea, however, arguing that deportation rulings can’t be overturned simply because someone is dying, despite there being a clause that allows for exceptions on “extraordinary compassionate grounds”, such as a life-threatening illness.

According to Migration Board head Dan Eliasson, the mere presence of the right medicines in the home country is sufficient to carry out a deportation.

But Eilasson’s explanation failed to resonate with Svensson, who called the decision to deport Olasupo “scandalous”.

“If they interpret the law – and this is all about interpretation – such that a person in this condition can’t be allowed to stay in Sweden, then it’s high time to rewrite the law,” he told TV4.

Despite pleas to allow him to stay in Sweden, Olasupo was nevertheless put on a flight from Stockholm to Nigeria early on Wednesday morning.

But the 28-year-old’s time in his home country was short-lived.

Upon arriving in Nigerian, local authorities demanded that Olasupo pay to be let in the country and that Sweden provide funds to cover the costs of his healthcare needs – demands with which Swedish authorities refused to comply.

As a result, Olasupo was put back on a plane and found himself once again on Swedish soil by late Wednesday afternoon.

The Migration Board’s Annette Backlund placed responsibility for the botched deportation with the police, who are tasked with actually carrying out expulsions.

“This trip was planned and carried out by the police, and it’s the police’s job to have the necessary contacts to ensure that the trip can take place. We had no reason to believe that he wouldn’t be accepted by Nigeria,” she told TV4.

“The police have surely done, ought to have done, all that they can do to carry this out. Now something happened during the trip which we still don’t know about and when we have more information about what happened, we’ll reassess the matter again.”

Upon hearing the news, Svensson condemned Nigeria’s reaction, but added Swedish officials also bear some of the blame.

“Nigeria was wrong – a country should accept its citizens. But that doesn’t cut it as an excuse for Sweden,” he said.

“It’s inexcusable to use a simple explanation that they didn’t know how the Nigerians would react when they got there.”

Birgitta Krona, head of the Sundsvall asylum seekers’ committee, was also upset by her client’s unexpected day-trip to Nigera.

“It’s a waste of money, and a waste of a human being’s last bit of strength,” she told TV4.

Upon landing again in Sweden, Olasupo was taken to a Migration Board facility in Märsta where he remains pending a new decision from migration officials about his future.

“This has affected our community very greatly,” Kamran Chabokdavan, spokesperson for the Swedish-Iranian interest group, or Intresseföreningen för Svensk-Iranska frågor, told The Local. “There’s so many people who are feeling depressed or mistreated.”

He had planned to marry his Swedish partner in 2019, but has still not been able to as his parents have not been able to get a visa to come to Sweden, despite visiting, and returning back to Iran several times before.

“If it was the first time that my parents came here, then it would be more reasonable to say that we cannot be sure that you will go back,” Chabokdavan, who works as a vet in Gothenburg, said. “But if the person has been here ten times before, and suddenly you decide to reject the application, that is a little bit odd.”

The group now has 2,000 members on Facebook and has contacted the embassy in Tehran, Sweden’s foreign ministry, and MPs in two of Sweden’s political parties, who Chabokdavan said had promised to raise the issue in their parties and to the government.

Chabokdavan told The Local that many Iranians were suffering from the shift to a stricter visa policy.

“Another member in our group had a sister who was a late-stage cancer patient at the hospital, and her parents couldn’t come here to say goodbye to her.”

Rozita Akrami, a data scientist at Ericsson, also a group member, has collected data showing that Sweden is now the worst country in the Schengen area for giving visiting visas to Iranians, with only 35 percent of visa applications by friends and relatives of citizens accepted.

She claims there was a “drastic drop” in the acceptance rate, from 55 per cent in 2018 to 35 percent in 2019, with France accepting 75 percent of visa applications from residents’ relatives that year and Switzerland 79 percent.

“It seems that the Swedish embassy in Iran has decided to apply stricter criteria, which are really, really unclear,” Chabokdavan said. “It’s really not clear what’s the criteria is here, or why they are rejecting so many documents.”

In a judgement from last week, the Migration Court ruled that the tougher approach taken by the Swedish embassy in Tehran was justified by a recent rise in the number of Iranians granted visas to Sweden who had then decided to stay and apply for asylum.

“The embassy further notes that in recent years hundreds of Iranian citizens have applied for residency in Sweden after travelling in on a visa that had been granted,” the court said, justifying its decision to reject an appeal.

“The embassy can point to the Migration Agency’s reports that a several of these people had had been granted visas previously, even several visas. As a result, visas previously awarded are not a strong indicator of an intention to return.”

In its judgement, it also noted that sanctions against Iran had resulted in a “severely worsened economy”, with “high unemployment and a weakened currency”, while also pointing to growing “repression of religious minorities” and “imprisonment of political dissidents”.

In a letter to the embassy in Tehran the group complained that there was no mechanism to replace documents rejected by the Swedish authorities, or to send in missing documents. The group also called for clarity on how applicants’ economic situation was assessed and how relevant it was, and called for the embassy to publish its official statistics from 2015 to 2022.

“This is about parents who have lived for 60 to 70 years in their homeland and visited Sweden several times while always leaving the Schengen region before their visa has expired,” they wrote.

Chabokdavan said that in some of the rejection letters, applicants had been told that the worsening economic situation in Iran made Sweden’s authorities worried that visiting relatives would not now return.

Other rejection letters, he said, had stressed that just because the applicant had visited Sweden and then returned home to Iran many times before, did not mean that they could be relied upon to do so again.

He said that it was unclear what documents would be enough to prove how well established and tied to Iran the visa applicants are.

Iranians, who came to Sweden both after the Islamic Revolution in 1979 and during the Iran-Iraq war in the 1980s, are one of Sweden’s most successful migrant groups, with 60 percent getting a university education, and many working within universities, or in high skilled professions.

“These are people who are really established in Sweden by their job or their studies,” Chabokdavan said. “And their parents usually have a strong, economical base in Iran, otherwise, they couldn’t get this kind of visa from the beginning.”

The Local has contacted the Swedish foreign ministry and the embassy in Tehran for comment.