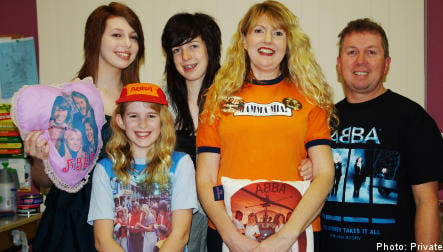 Back in 2006, plans were announced with great fanfare for a permanent ABBA Museum in the heart of Stockholm following a blessing for the project from band members Benny Andersson and Björn Ulvaeus.

“It’s great that someone feels like taking on our musical history and making it accessible,” the four members of ABBA said in a joint statement at the time.

The museum, originally scheduled to open on June 4th 2009, was to feature clothes, instruments, memorabilia, and other artifacts tracing the band’s meteoric rise to global pop music stardom

But the ambitious project ran into trouble last summer when organizers learned that renovations to the planned location, Stora Tullhuset, a historic old customs house located on the Stockholm waterfront, proved more costly and complicated than originally thought.

In September, news came that the museum’s opening would be postponed indefinitely, and in December the project was sold on to Touring Exhibitions, a leading tour and exhibition company with ties to Polar Music, the label which helped launch ABBA onto the world stage.

While the search continues for a location in central Stockholm suitable to house a permanent ABBA exhibition, Touring Exhibitions has renamed the project Abbaworld and plans to take its collection of ABBA memorabilia on a world tour until the planned museum becomes a reality.

“Abbaworld will make it possible for fans of all generations and from all over the world to experience the music, memories and magic of ABBA through the innovative use of technology in sound, visuals and communications,” said Touring Exhibitions president Magnus Danielsson in a statement.

The company also plans to launch a new website to accompany the exhibition which will allow visitors to record and play back selected interactive features such as dancing, singing and performing with ABBA.

“It is meant to be an experiential exhibition,” company spokesperson Louise Lönnqvist told The Local.

“It’s going to be fantastic.”

If all goes according to plan, the world tour will wrap up just in time for the exhibition to take up permanent residence in Stockholm, although Lönnqvist admitted the tour could last longer than planned depending on demand and how quickly plans move forward with the museum.

“But there will be a permanent museum in central Stockholm eventually,” she emphasized.

Yet the news is little consolation to Australia-based ABBA fan Brenda Pfeiffer and her family, who were forced to cancel plans to visit Stockholm this summer to attend the museum’s originally scheduled opening.

“We are all so disappointed that we will not be in Sweden this week when the museum was meant to open,” Pfeiffer told The Local.

A fan of ABBA since childhood, the 40-year-old mother of three wanted nothing more than to come to Stockholm and visit the museum with her children, who themselves have also grown fond of the band.

“[My children] Ebony and Brittany like ABBA, though they don’t like to admit it. Little 9-year-old Taylor also loves ABBA, nearly as much as I do!” she said.

Last year, Pfeiffer’s husband, who after 20 years of marriage has also come to appreciate ABBA, purchased tickets for the family of five to come to Stockholm to attend the ABBA Museum’s scheduled opening.

“When we were notified that the museum was delayed and the organizers didn’t know when or where the museum would open, we were all devastated,” she said.

However, it’s possible that Pfeiffer and her family may get the chance to encounter the ABBAexperience closer to home in Australia.

“That could be,” said Touring Exhibition’s Lönnqvist, adding that the Abbaworld tour is expected to start in Europe in the autumn before heading to other locations around the globe.