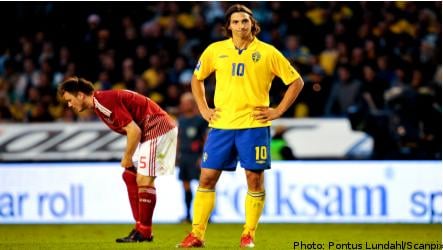 The Danes extended their lead to three points at the top of group one with a hard-fought win courtesy of a goal from Thomas Kahlenberg.

Sweden were left empty handed and 10 points adrift of the Danes with five matches remaining despite winning an early penalty and creating a few decent chances in the latter stages of the game.

Industrious Lyon midfielder Kim Källström missed a penalty in the 11th minute after Juventus defender Olof Mellberg had been hauled down by Simon Kjaer in the box.

Källström’s penalty was struck well, but at the perfect height for Danish veteran keeper Thomas Sörensen who pulled off a good save to push the shot wide of the upright.

The proceeding game was low on quality with a slew of mistakes, missed passes and crude long balls aimed at the head of Inter star Zlatan Ibrahimovic.

Thomas Khalenberg took advantage of an error by hapless Swedish right back Mikael Nilsson in the 22nd minute to put Denmark into the lead with a tap in from close range.

Denmark set out their stall well and were able to hold off the inevitable Swedish fight back in the second half.

Ibrahimovic created a good chance for Helsingborg veteran Henrik Larsson to equalise but Larsson could only shoot over the bar from close range.

Further half chances to claim something from the crucial qualifier fell to substitute Johan Elmander and to Ibrahimovic but produced no reward as the Swedes struggled to break down a Danish rearguard marshalled by Liverpool defender Daniel Agger.

As the Danes continue to frustrate the Swedes, coach Lars Lagerbäck threw on Kalmar’s Viktor Elm and Birmingham winger Sebastian Larsson who worked hard to get into the action.

But when English referee Mike Riley put the whistle to his mouth to end the game on 94 minutes the Swedish players could only hang their heads in despair as their World Cup dream appeared a distant hope while the Danes celebrated taking a large stride closer to South Africa 2010.