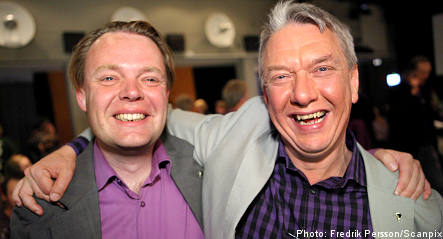 Scenes of wild jubilation broke out at the party’s election headquarters when state broadcaster SVT announced a projection likely to give the party enough votes to claim two seats in the EU parliament.

“The polls beforehand had us at between eight and nice percent, but everything over four percent is a political sensation,” party leader Rick Falkvinge told news agency TT.

12 percent of men and 4 percent of women plumped for the Pirate Party, according to the SVT survey.

Among voters aged under 30, some 19 percent are believed to have cast a vote for the Pirate Party.

“They are the biggest party among young people, bigger than both the Social Democrats and the Moderates,” said politics professor Sören Holmberg.

Pirate Party voters said they considered the freedom to file share by far the most important issue when deciding their party allegiance.

The party was founded in January 2006 and quickly attracted members angered by controversial laws adopted in Sweden that criminalised filesharing and authorised monitoring of emails.

Its membership shot up after a Stockholm court on April 17th sentenced four Swedes to a year in jail for running one of the world’s biggest filesharing sites, The Pirate Bay.

Sunday’s election attracted more voters than in 2004, the last time Europe went to the polls. With 80 percent of the votes counted, projections showed a 42.5 percent turnout this time round, up 5 percentage points on the previous European Parliament election.

Aside from the Pirates, the Greens were Sweden’s other big winners, scoring a sensational 11.5 percent in exit polls and becoming the country’s third largest party behind the Social Democrats (25.1 percent) and Moderates (18.5).

“It’s fantastic. If this is how it ends up it is better than I dared to dream of. What’s fantastic is that I don’t think we got protest votes, I think we got votes based on our own programme and our own issues,” Green Party spokesperson Maria Wetterstrand told SVT.

There was a strong showing too from the Liberal Party, which is set to claim a projected 11.4 percent, just behind the Greens.

For the Left Party on the other hand the election proved catastrophic, with Lars Ohly’s party predicted to drop to 5.7 percent, compared to 12.8 percent in 2004.

The June List too would seem to have seen better days. Rising stars last time round, with an incredible 14.6 percent, the relatively new party has come back down to earth with a bruising bump: SVT’s exit poll gives the June List a 3.6 percent share of the vote, not enough to gain a parliamentary seat.

The survey puts the nationalist Sweden Democrat party at 2.4 percent, up from 1.1 percent in 2004.

The Centre Party (5.8) and the Christian Democrats (5.1) both appear to have performed slightly worse than in 2004 though both comfortably surpassed the 4 percent threshold necessary to qualify for a seat.